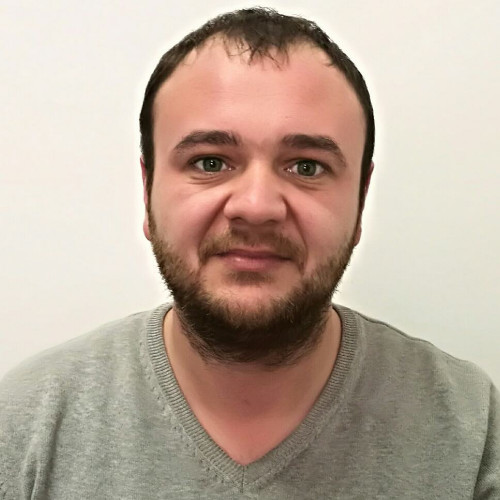 author: mariana
Based on the thesis by: Aleksandar Zlateski, Research Assistant at Institute of Earthquake Engineering and Engineering Seismology, Macedônia

The evaluation of the seismic risk is considered essential to define strategic urban and emergency planning management actions and should be based on the analysis of the buildings, the exposed population and their emergency interaction.

Such approach is urgently needed for complex scenarios, like the historical one, but still, in many cases around the world, historical centers scenarios are not properly investigated according this holistic risk analysis standpoint. 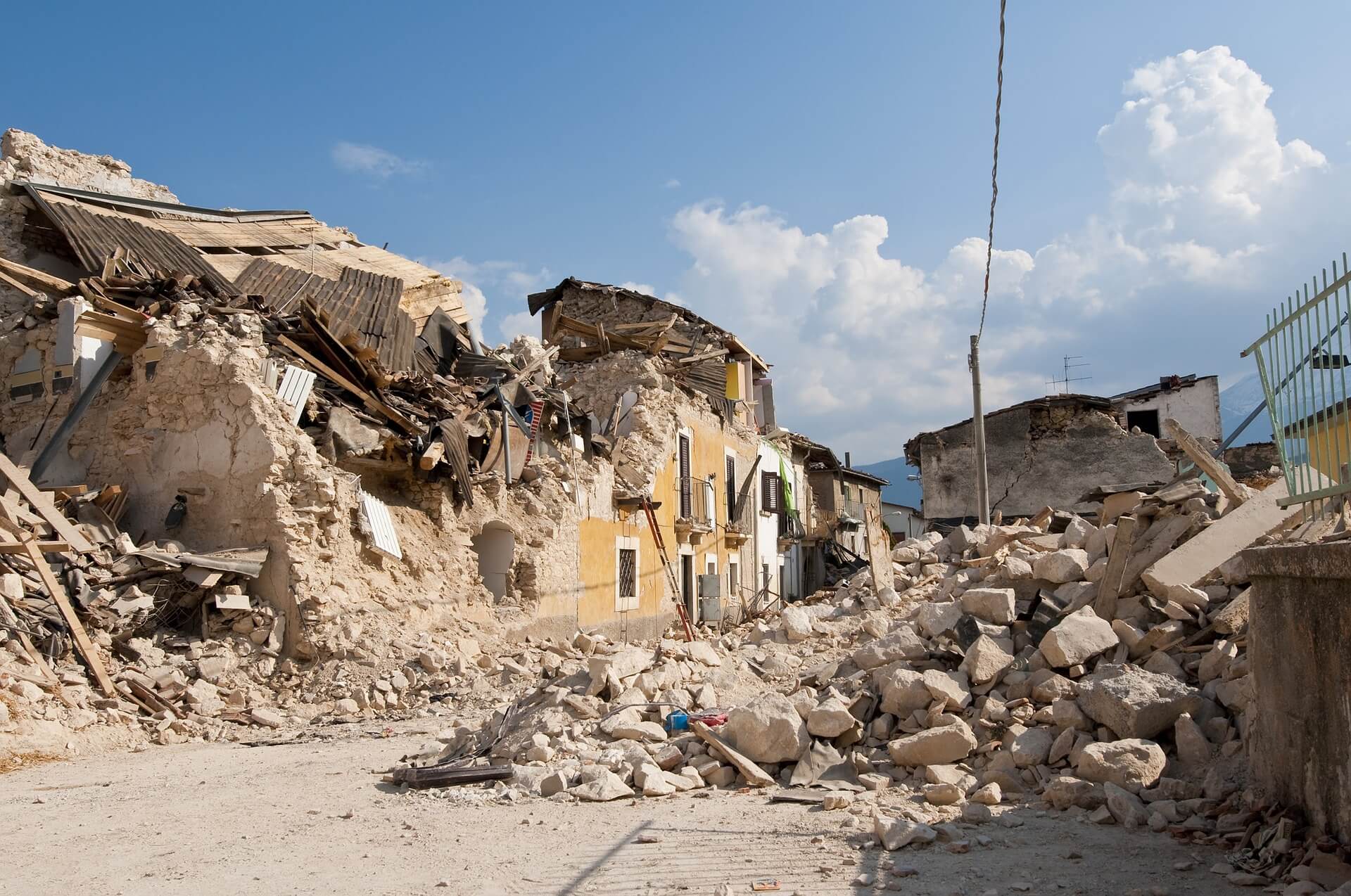 For the management of earthquake emergency, by identifying the main risk mitigation solutions for reducing the vulnerability of historic buildings and drafting emergency plans cantered above all on rescuers’ actions, there are general guidelines on the international scene.

The management of the emergency, in a substantial way, is related to the estimation of the post-event losses, basing the analyses on the seismic hazard according to different levels of in-depth analysis. It can be reasonably stated that (more than for the Italian context, Italian technical commission for seismic micro-zoning), the level of detail in the tracking of post-event conditions is high.

In fact, in the wake of trans-national experiences, the proposed tools generally start from the rapid analysis of the vulnerability (e.g. large-scale application of methods with macroseismic correlation to assess the level of post-event damage (loss estimation methodologies) for both buildings and infrastructures (including service lifelines and pipelines), and then to calculate the number of possible deaths and injuries following the event and the need to evacuate some urban areas due to the effects of the earthquake (especially for large cities).

In order to assess immediate and long-term losses, other approaches, such as those of the model developed in the United States by FEMA (Federal Emergency Management Agency 2003), propose fragility curves for the estimation of damage to buildings (starting from the typological vulnerability of the structures), infrastructures and urban networks. Correlations for measuring the extent of road debris by building collapse are also proposed. The estimate is made in terms of weight from typological data on buildings in North America. The model is useful for predicting the amount of debris to be disposed of and, in reference to the short period, the possibility of blocking roads in the emergency.

There are some guidelines that include indications of multi-hazard assessments. For example, The Japanese ones also consider the effect of the development of post-earthquake fires at the urban level. 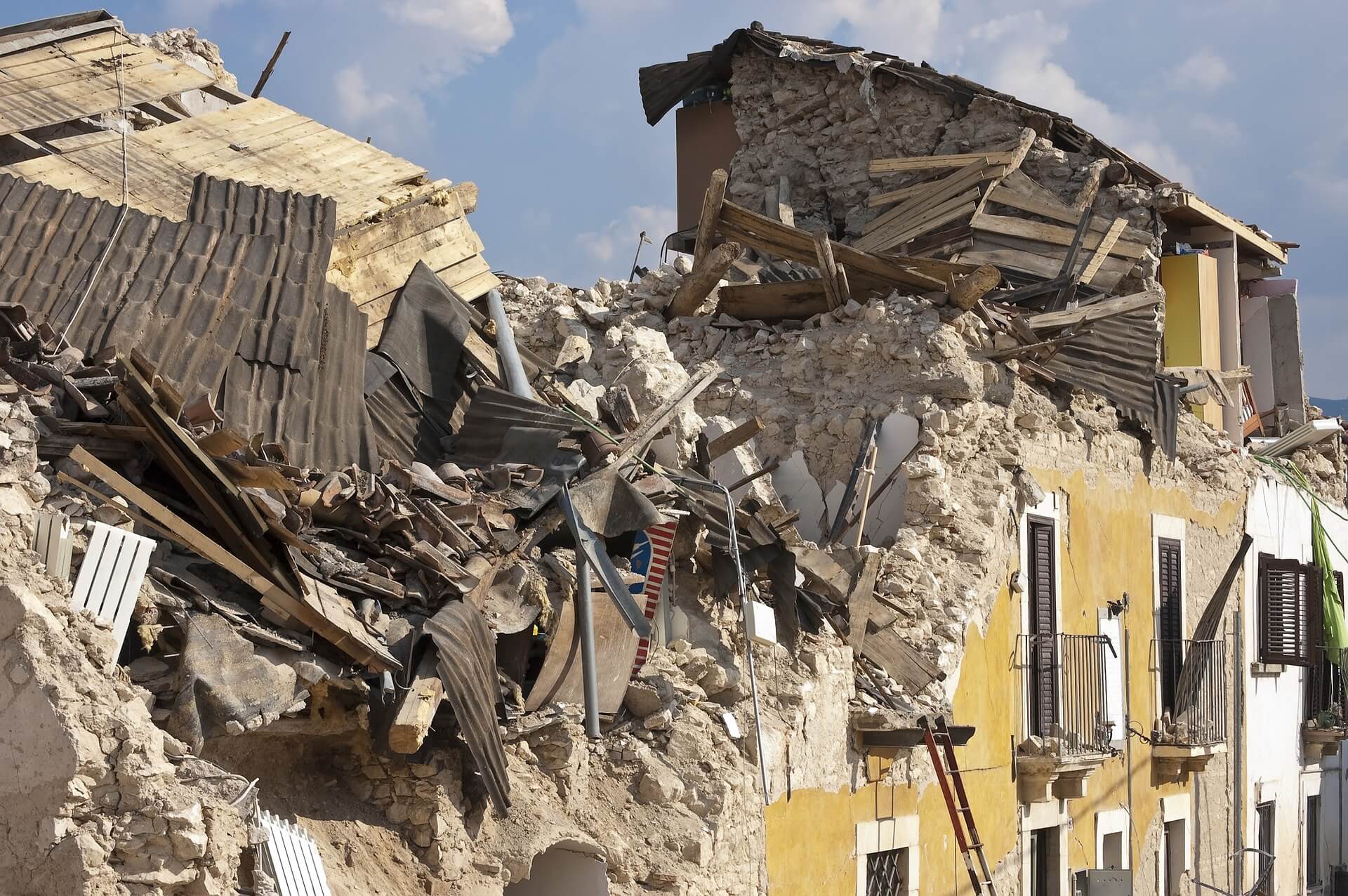 The importance of software simulation

This work proposes a methodology, composed by several different multidisciplinary approaches, able to:

Based on the seismic vulnerability assessment of masonry facade walls and on a risk analysis approach at the urban streets network scale, the methodology takes advantages of software simulation for individuals' evacuation motion analysis (EPES), by using suitable methods for urban data collection and innovative tools for emergency simulations in different scenarios.

Methodology for evaluation and mitigation of seismic risk in Historical Centers

Earthquakes are inevitable natural hazards with the potential for large numbers of fatalities and injuries, major property and infrastructure damage and serious disruption of everyday life. However, earthquake losses may be reduced to the minimum through a systematic risk assessment process.

Hazard mitigation methods to reduce earthquake losses need a great effort for development and implementation. This has been recently recognized as a methodology of risk management, a process of determining what should be done for a hazard, deciding which hazards and at what scale magnitude should be managed, and in what priority order.

Systematic approaches to evaluating earthquake risks have become an important issue in our engineering community and hazard mitigation methods to reduce earthquake losses need a great effort for development and implementation. Thus, one of the challenges of the research on systemic risk analysis is to define methods in order to properly take into account the interdependencies between different components.

By using innovative emergency analysis tools, such as the evacuation simulation model, to assess emergency conditions in existing city centers, it is possible to define and evaluate the impact resulting from the adoption of different vulnerability reduction strategies with the final aim of mitigating seismic risk.

Among other possible strategies, it is worth highlighting the following ones: 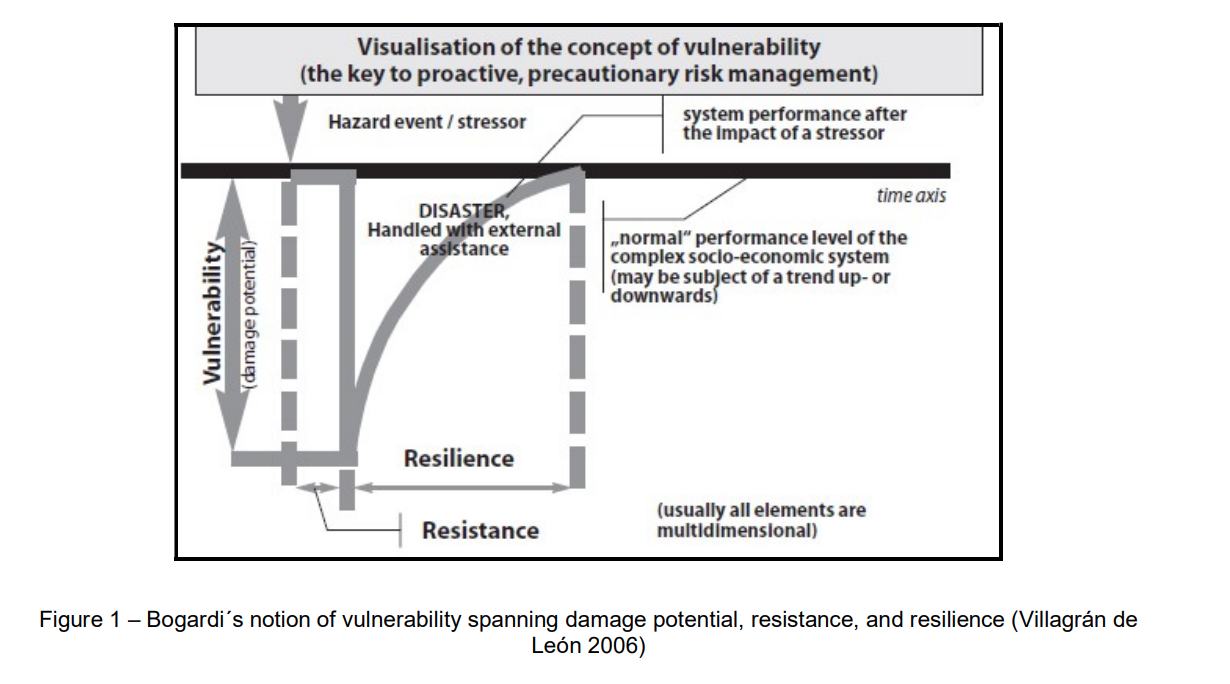 The methodology was applied to a case study, the Historical Center of Coimbra, Portugal, by considering its current built environment condition. Results in term of vulnerability indexes for buildings and streets, mean damage grade distributions, debris amount, evacuation time, pedestrians’ flow along the evacuation paths and the occurrence of spontaneous assembly areas are presented and discussed in the light of the analysis of the evacuation safety level for the different emergency network elements (safe areas and evacuation paths). 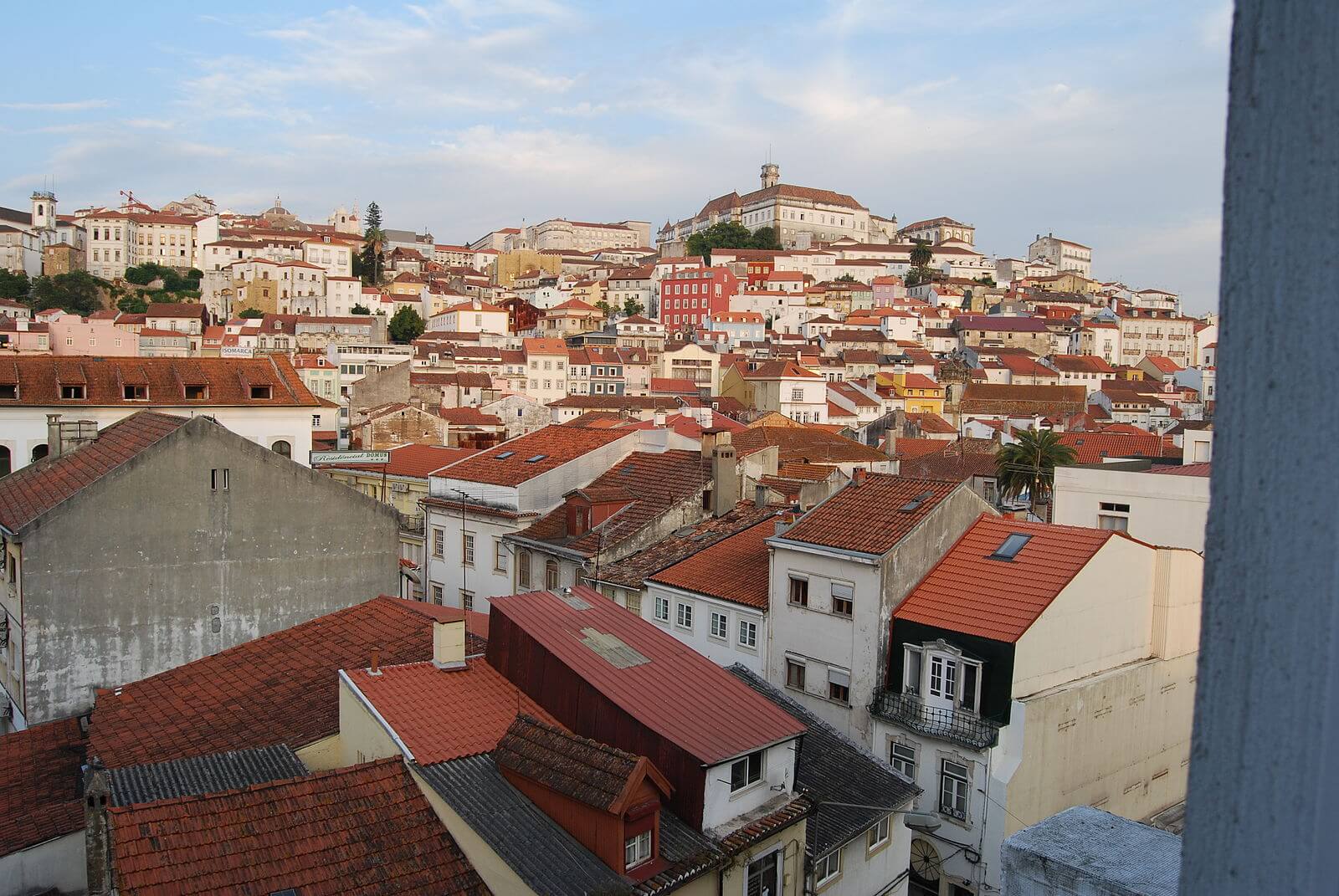 Through the implementation of the methodology for evaluating, managing and mitigating earthquake risk many different aspects are noted and concluded regarding with the vulnerability. From different simulations scenarios analysed, several conclusions can be drawn, particularly regarding to the overall emergency evacuation process and its safety level mitigation. 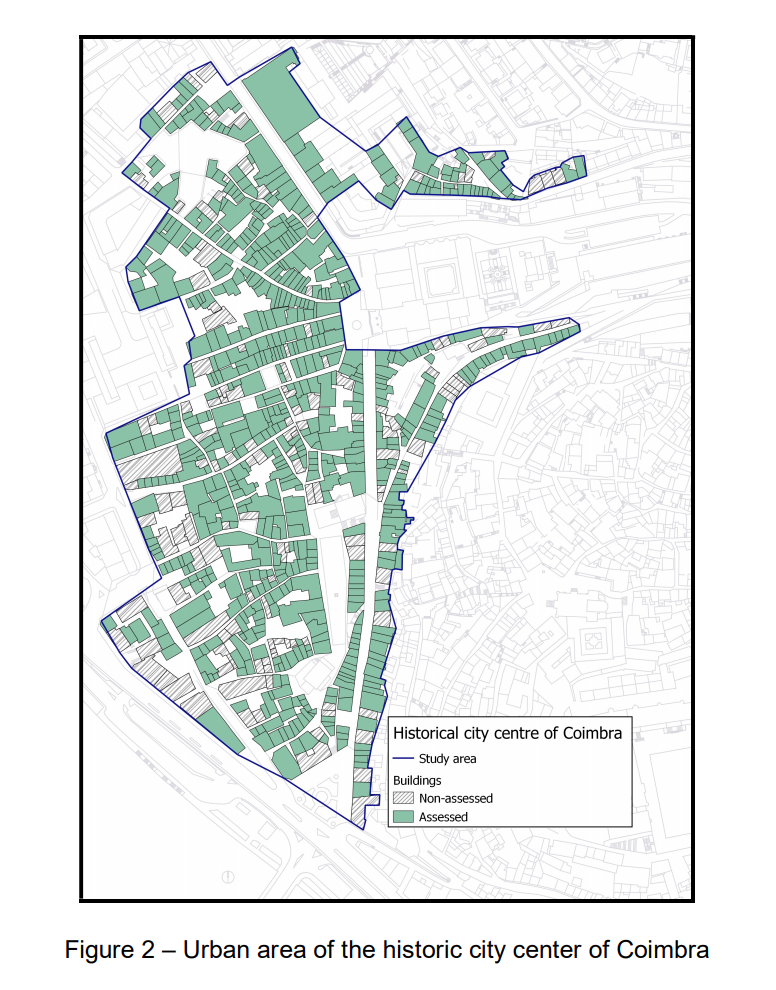 It is important to point out that the results have highlighted the most vulnerable buildings, potentially dangerous, not only but mainly due to the partial collapse of their facade walls or the non-structural elements, may threaten the safety of people or obstruct the road in front of the building, making difficult, or even preventing, the evacuation process.

With the implementation of the methodology to the case study, through the combination of vulnerability aspects, EPES simulations and KPIs safety analysis have assessed the level of risk for evacuating pedestrians, determined first-aid points positions in the urban fabric and evaluated risk-reduction strategies and related priority orders for interventions on the existing buildings. 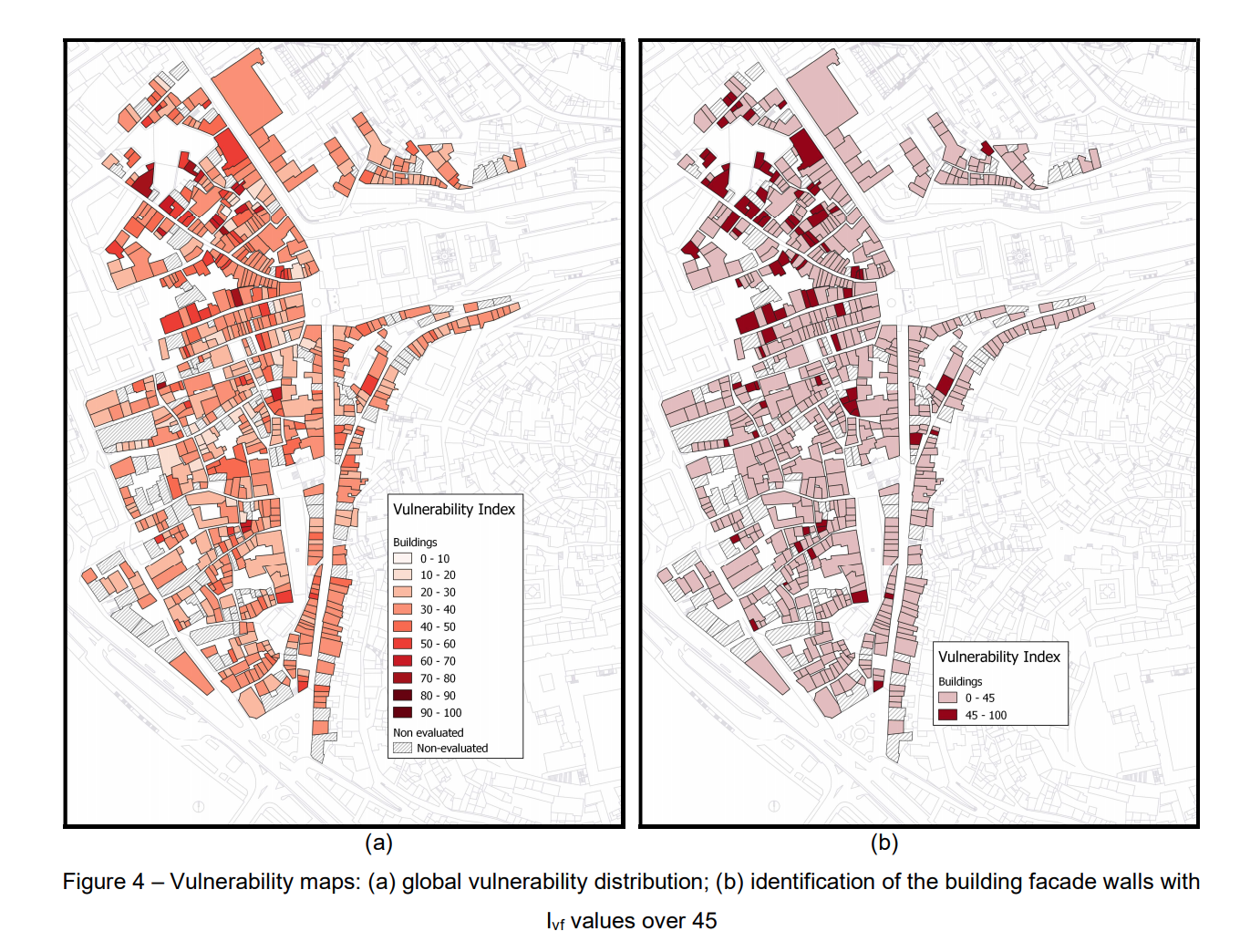 The application of the street seismic vulnerability assesses allows to evaluate the vulnerability of the streets in a quick way, highlighting the most vulnerable and potentially most problematic links motivated by the presence of debris their extension. This assessment has assumed itself as an effective tool in the first try to establish the evacuation path availability. 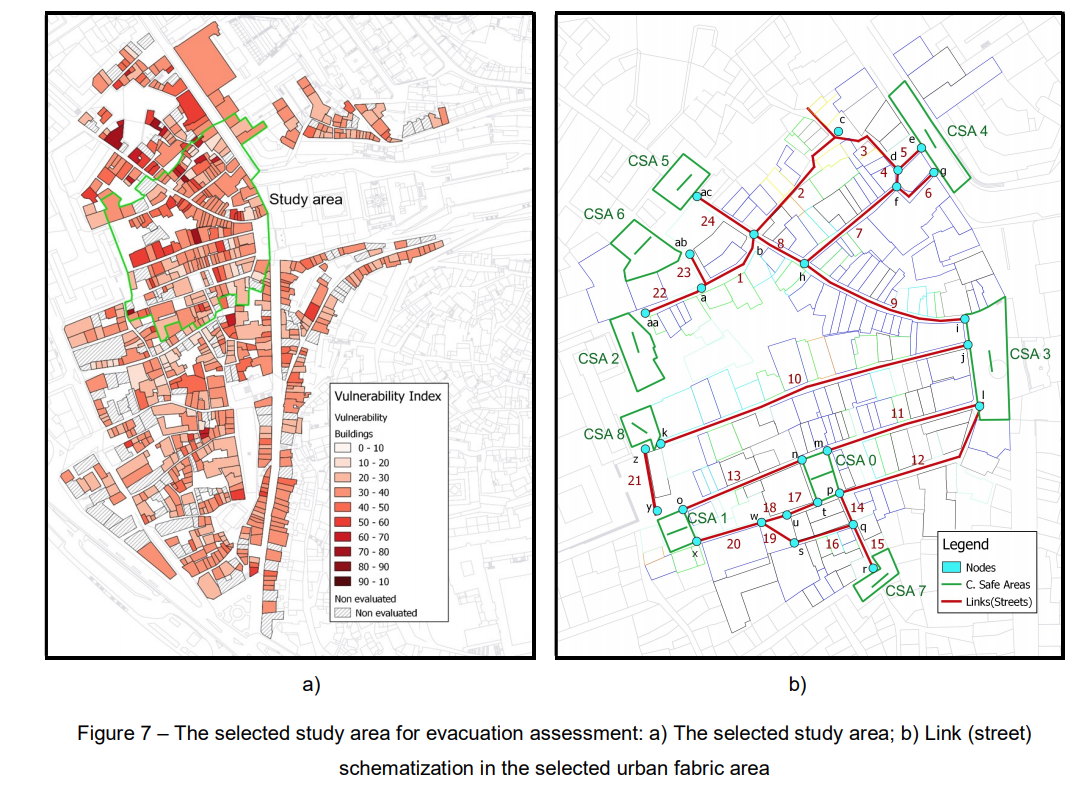 Plans, emergency paths and possible alternative routes for evacuation flow and wayfinding solutions for population proposed are, so as to lead citizens to proper evacuation paths. These results are helpful and could be used in the emergency planning management in order to improve the overall emergency process during the earthquake scenario in the Historical Center of Coimbra. 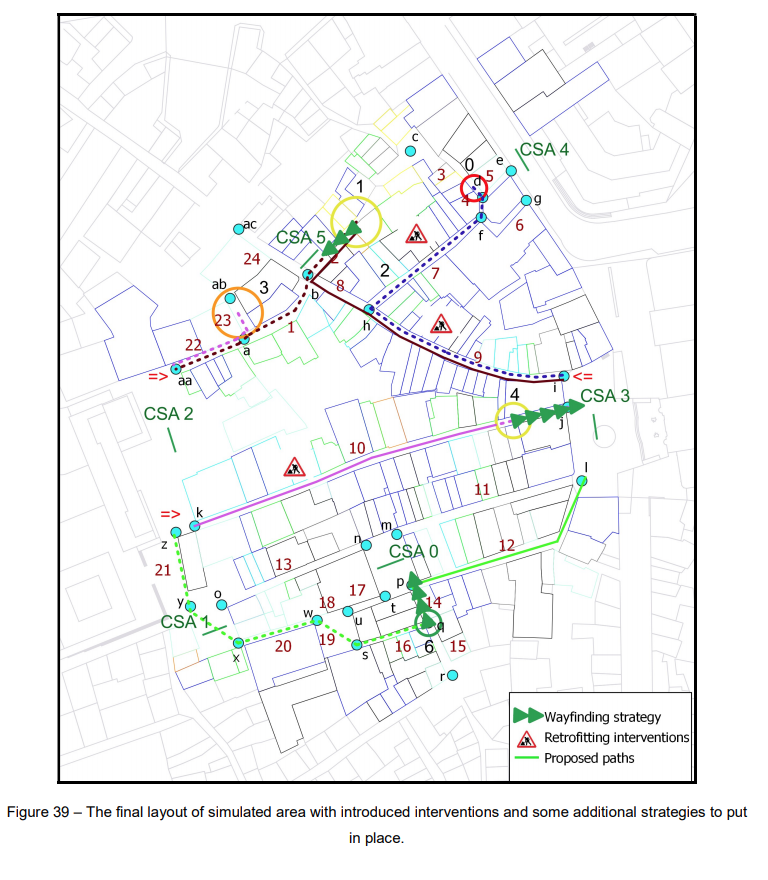 Implementation of the proposed multidisciplinary methodology can be recommended as an effective tool to evaluate the seismic risk, contribute to risk management and to propose risk mitigation strategies.

A wide scale application through different case study should be encouraged. Maybe such applications could evidence general criteria for safety assessment depending on urban fabric features, thanking to KPIs analysis outlines. It could be applied in a variety of structured urban areas, by considering different disasters and emergencies (e.g. flood, fires, etc.) that imply evacuation for the exposed population. In this case, specific urban environment modification rules due to the disaster conditions and specific evacuation behaviours should be introduced (for example by modifying the evacuation simulator).

Moreover, current study seems to evidence that the method is very efficient especially in historic city centers, where the emergency management strategies are significant in order to enlarge the safety of the pedestrians during the emergency process. 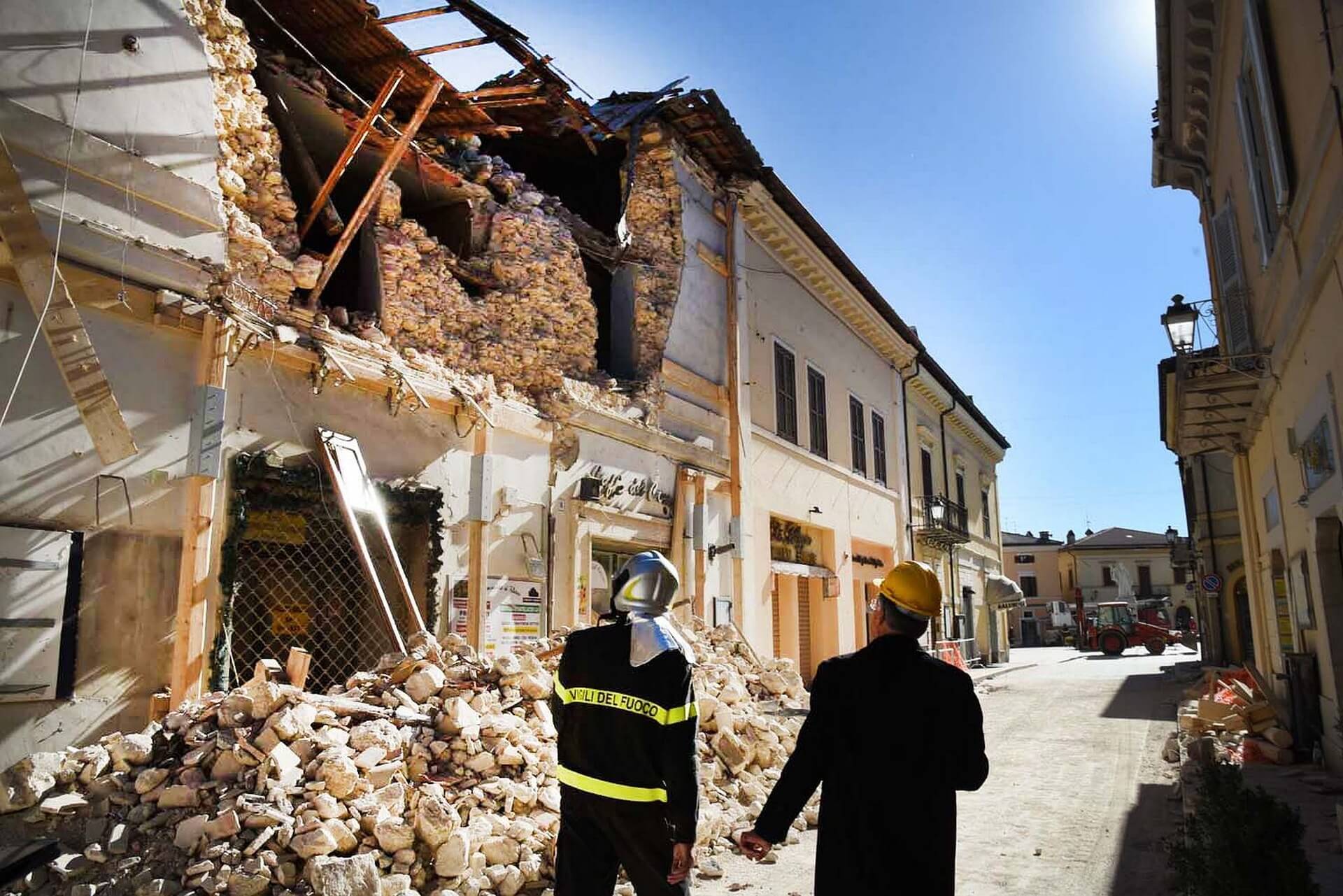