The Portico of Glory

The Portico of Glory

The Portico of the Glory in the Cathedral of Santiago de Compostela is a monument of the Romanesque style, created by Mestre Mateus, in the 12th century. Presently the Portico doesn’t have the complete work of the Mestre Mateus, since that some pieces were removed when constructing the current facade. The other difference is also that the original work was polychrome but today only remains traces of painting in some points. The Portico took 20 years to build, but became the hallmark of the cathedral, with its representation of the Celestial City through an iconography removed from the sacred texts.

The architectural structure of the Portico consists on three overlapping plants: the crypt symbolizing the earth, the portico itself, which represented the Celestial Jerusalem and the last element was the rostrum which, through rosettes, enabled it to be illuminated all day, representing the elevation of the human to the divine. The Portico consists on three half-point arches and the central arch is the largest (twice larger than the other two), the only one having a tympanum and is divided by a central column with the figure of Santiago. 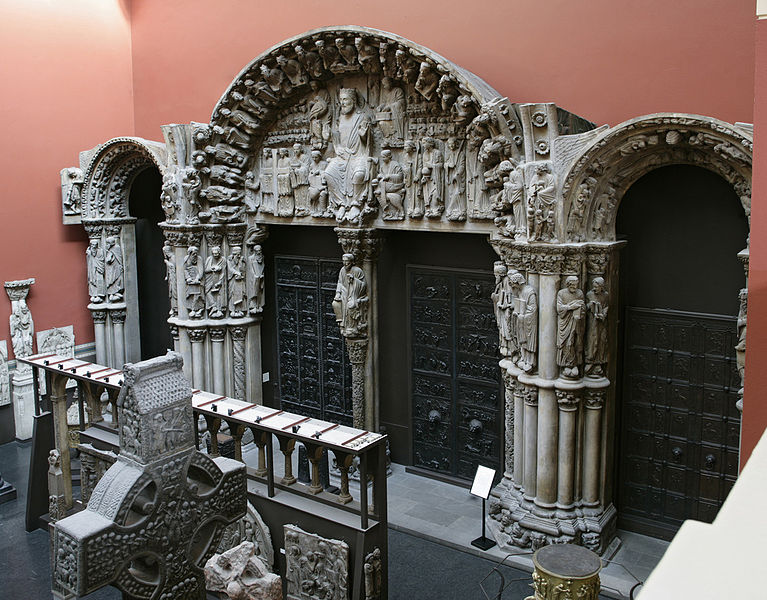 This Portico served as the main door in the temple in the middle ages, but this was replaced in the eighteenth century by a new facade (and entrance) facing the Plaza de Obradoiro. It was in this initial period, due to the more direct contact with the climate changes, that the porch suffered the greatest wear, as well as other alterations suffered over the centuries. With that, the Portico really needed a restoration.

It was in an attempt to recover as much as possible of the original shapes and colors of the Portico that the Santiago Cathedral Foundation, with the exclusive sponsorship of the Barrié Foundation, launched in 2006 an ambitious project of study, intervention and restoration of the Portico da Glória.

A multidisciplinary and multinational scientific committee was created, with archaeologists, architects, geologists and chemists, who began by studying the monument. Each stage of the process has been carefully studied and documented, giving rise to a database, which is now mandatory consultation for any future intervention in the monument.

The wear of polychromy is the main mark of the passage of time and the action of man on the monument. During the intervention, the restorers also discovered traces of medieval polychromy, dominated by blue and gold, but also light pink and others, as well as a panoply of decorative, figurative and geometric motifs.

After twelve years of study, planning, restoration work, 50,000 hours of exclusive attention and approximately 6 million euros later, Portico of Glory was just restored with the original medieval colors. The end of the intervention was officially marked with the visit of Queen of Spain, Sofia.

Receive every month our top articles about rehabilitation and preservation of historical constructions, information about job opportunities and much more.
porticoreconstructionrehabilitationrenovationrestorationspain