10 Mysterious Monuments Around The World

10 Mysterious Monuments Around The World

Who doesn’t love a great mystery? We’re all fascinated by legends and unrevealed truths, even more when they’re related with beautiful, breathtaking historical constructions. Continue to read to discover our selection of the most fascinating and mysterious monuments around the globe!

On the top of our list we have Stonehenge, a prehistoric monument in Wiltshire, England.  One of the most famous landmarks in the United Kingdom, Stonehenge is regarded as a British cultural icon. The site and its surroundings were added to UNESCO’s list of World Heritage Sites in 1986.

Surrounded by several hundred burial mounds and located far from the source of its megalithic stones, Stonehenge is, without a shadow of a doubt, one of the most mysterious monuments in the world.

The earth and ditch around the monument dates to 3100 BC, and while there is some disagreement on the precise date of the erection of the stones, that followed roughly between 2500 BC to 2200 BC.

But, what makes this historical construction so mysterious? There no certainties regarding the purpose of this site. The most consensual opinion is that this construction might has had multiple uses over the years, all of them cult related. It’s considered a spiritual and sacred place for worship with a connection to astronomy. Some believe that it was a sort of healing place, based on the conditions of the bodies buried around it. A bit creepy, yes, but also fascinating. 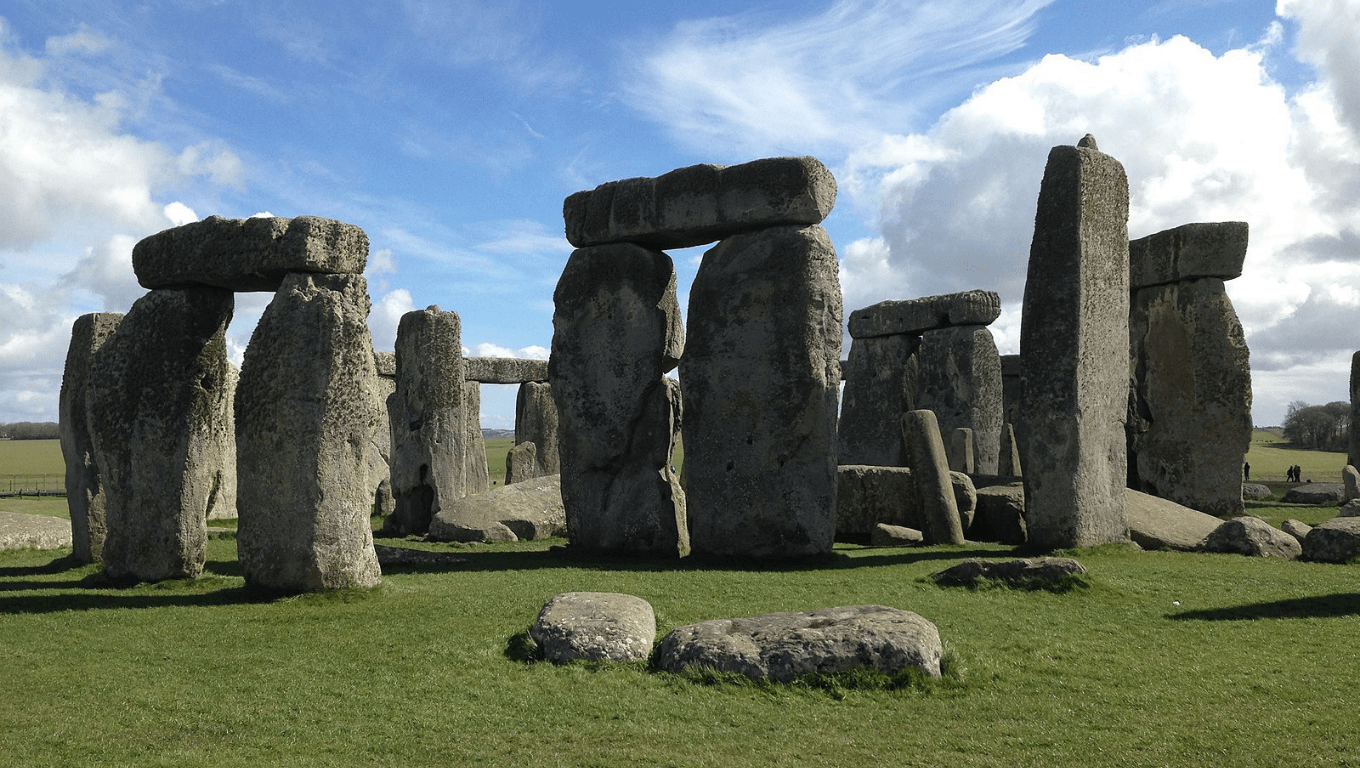 What can scream “mystery” more than giant 80-ton stone heads on a completely treeless island in the middle of the Pacific Ocean, amid currents that would have made said island really hard to stumble across?

In our top of mysterious monuments, Easter Island (or Rapa Nui) is the one place we could not leave left out!

It is believed that the inhabitants of the site originally arrived from Polynesia. The Easter Island is famous for its giant heads, that are called moai. They were built from the island’s stone quarries and were moved to their current positions.

There are no certainties here too, but moai are believed to represent tribal ancestors and they were all tipped on their faces during conflict among the tribes. They were likely moved using techniques incorporating tree logs, but – and this is part of the mystery –  the island was treeless by the time European explorers arrived. The problem of having to deal with the lost of these resources may have been in the origin of the conflicts in this region. 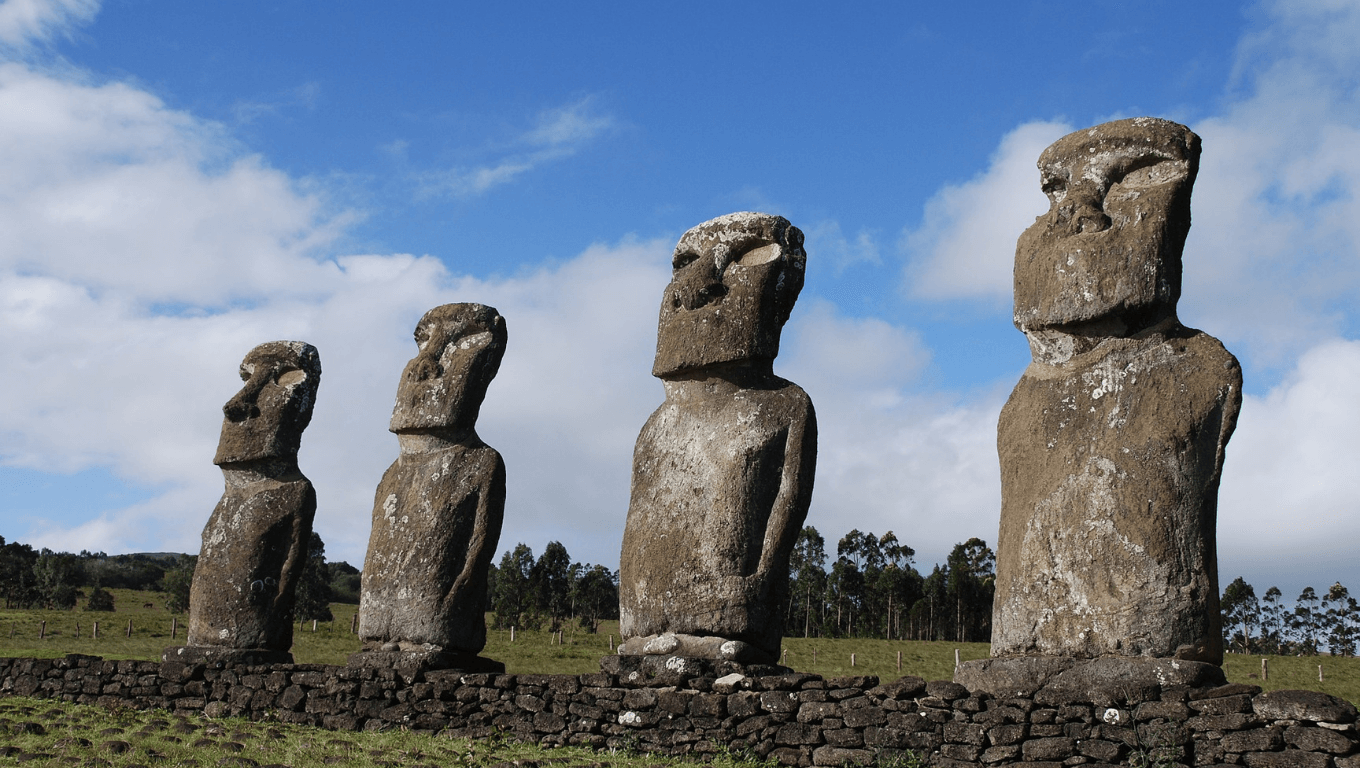 The Great Pyramids are likely the most recognizable monument in this list. The Egyptian pyramids are part of our imaginary since we’re children. Their popularity is, in big part, due the Hollywood movies that we grew up with and that were a huge box office success , like “The Mummy”.

The writer Agatha Christie, the queen of mystery herself, also played a great role in the association of the Egypt with mystery.

Who would have imagined that these stone structures, half-buried in the advancing sands of the desert, would inspire so many stories involving curses, treasure hunters and mummies?

While this mysterious monument dates and methods have become clearer over time, there are still so many unanswered questions. There are so many things about the Ancient Egyptian Culture that we still don’t know. 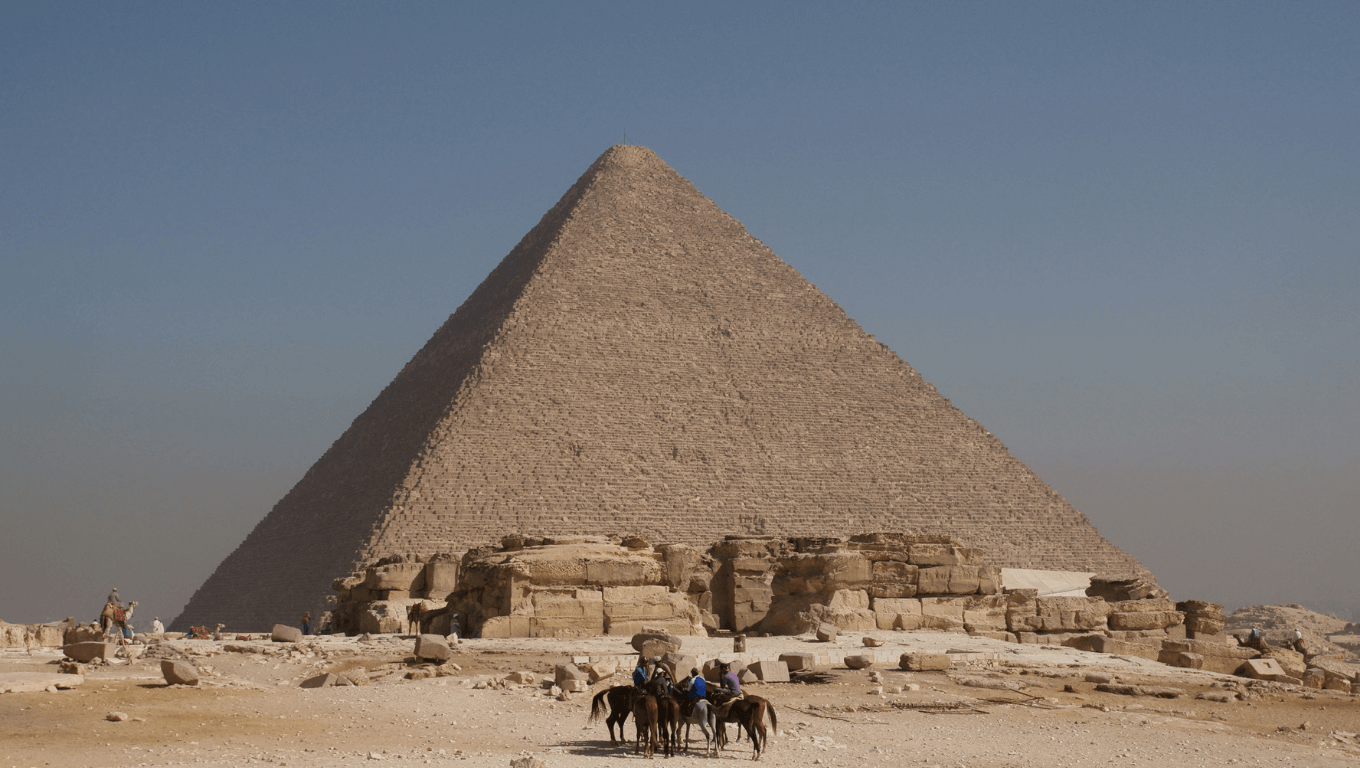 This famously photogenic city in the clouds of the Andes was built by the Incas in the 15th century for one of their emperors, Pachacuti. To visit this site, you have to go high – 2,430 metres above sea level.

Machu Picchu remained hidden even from the invading Spaniards and it wasn’t “discovered” until 1911.

The site is famous for its sophisticated dry-stone walls that fuse huge blocks without the use of mortar, intriguing buildings that play on astronomical alignments and panoramic views. Its exact former use remains a mystery.

The best ways to visit it are to ride the train from Cusco to the switchback road or to take an amazing multi-day hike along the Inca Trail. 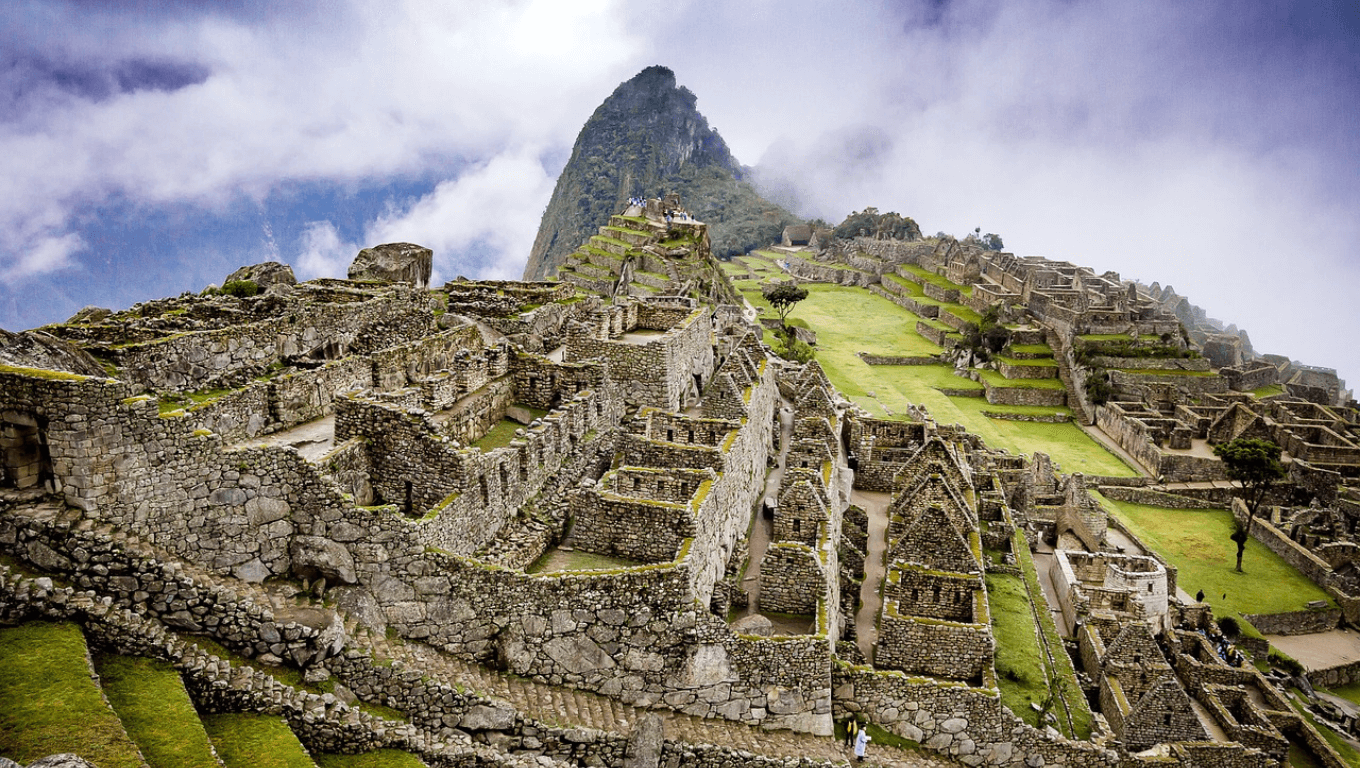 The Nazca Lines in Peru have baffled mankind for quite a long time–and the mystery doesn’t cease to intrigue the researchers nowadays. In fact, the more people study this site, the more intriguing it gets.

A team of researchers say the Nazca Lines represent “one of the most attractive ancient mysteries in the world.” It’s hypothesized that the geoglyphs had ritual astronomical functions, but no one knows for sure.

Identifiable easily from the air and spread out on desert land in southern Peru, these geometric designs are designated as a UNESCO World Heritage Site. There are hundreds of them and they range in style from simple shapes to clear line drawings of animals such as monkeys, sharks or lizards. The largest of them spans over 200 metres. They were created by removing the red stones of the region to reveal the white limestone underneath.

Remnants of what appear to be wooden stakes used in their design take some of the mystery out of how someone could create such figures without a bird’s eye view, but their purpose remain a mystery. Theories abound from astronomical alignments and directions to water sources, to the usual believers in extraterrestrial visitors in need of landing strips. 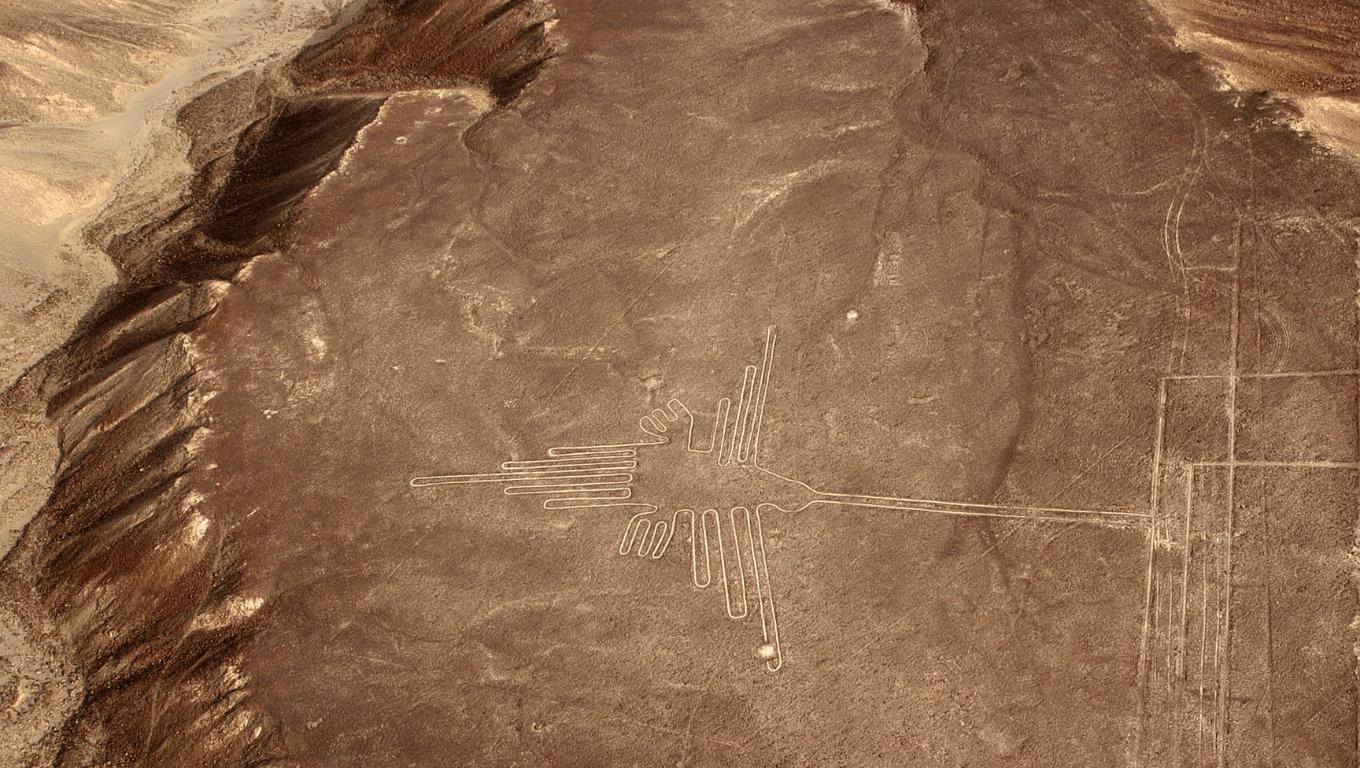 Palenque, also anciently known as Lakamha (meaning”Big Water”), was a Maya city state in southern Mexico that flourished in the 7th century.

The Mayan civilization showed some unique skills in building temples and pyramids. They also showed a complex writing system and deep astronomical knowledge.

The big mystery surrounding this fascinating (and, in some aways, advanced) civilization revolves its disappearance.

Their cities had collapsed before the arrival of the invading conquistadores. Palenque, in the state of Chiapas in southern Mexico, is just one of many mysterious monuments left behind. 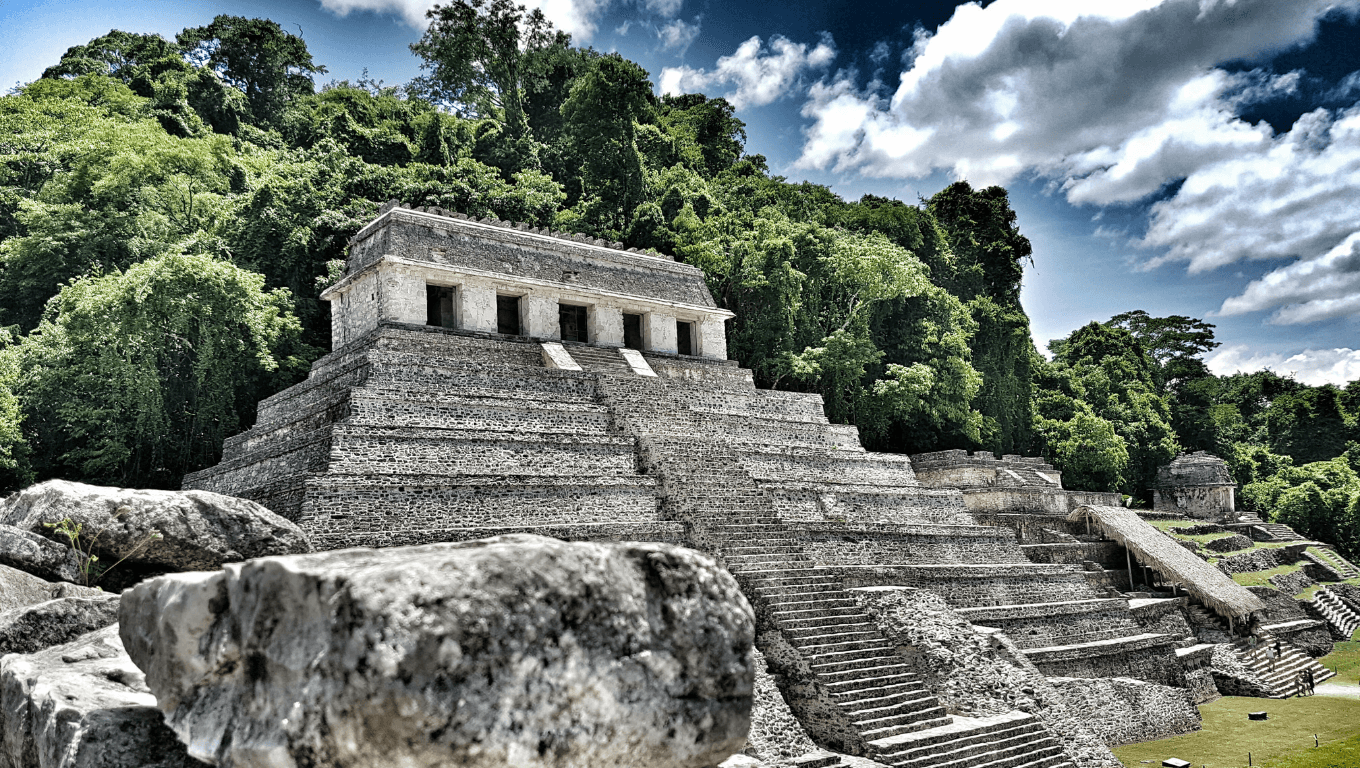 Pronounced “agar-eem,” this Neolithic site’s name means “standing stones”. Built between 3500 BC and 2900 BC, Hagar Qim is located on the southwest coast of Malta overlooking the waves of the Mediterranean.

The Megalithic Temples of Malta are among the most ancient religious sites on Earth.

The biggest of the stones for this mysterious monument are 7 by 3 metres and weighs over 20 tons. Parts of the temple line up with the summer solstice’s sunrise and sunset and there is a theory that this and other Maltese structures may be even older than believed.

The great mystery  surrounding these temples is that there is little evidence of a population sophisticated enough to have built them on this archipelago. 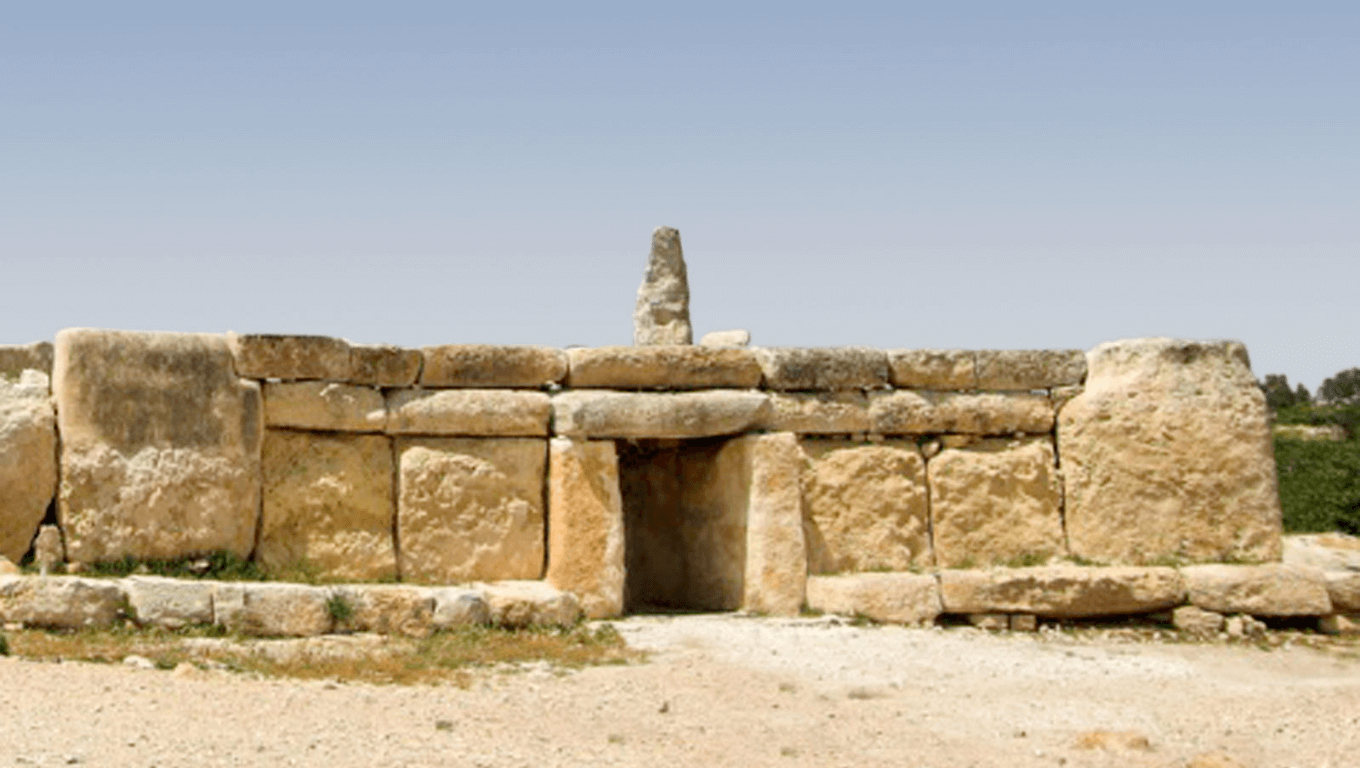 Carnac is a town in Brittany, northwest France. It’s best known for its beaches and for the Carnac stones, thousands of prehistoric standing stones spread across three alignments.

Nearby the beaches, there are over 3,000 standing stones or menhirs, put there during the Neolithic Period. Archaeologists are uncertain what these stones stood for, which makes this place so mysterious and fascinating. The taller stones are to the west and get shorter as one follows them east. The Carnac stones are the largest collection of menhirs in the world.

The attempt to figure it out the original purpose of this amazing site is a challenge for the imagination. 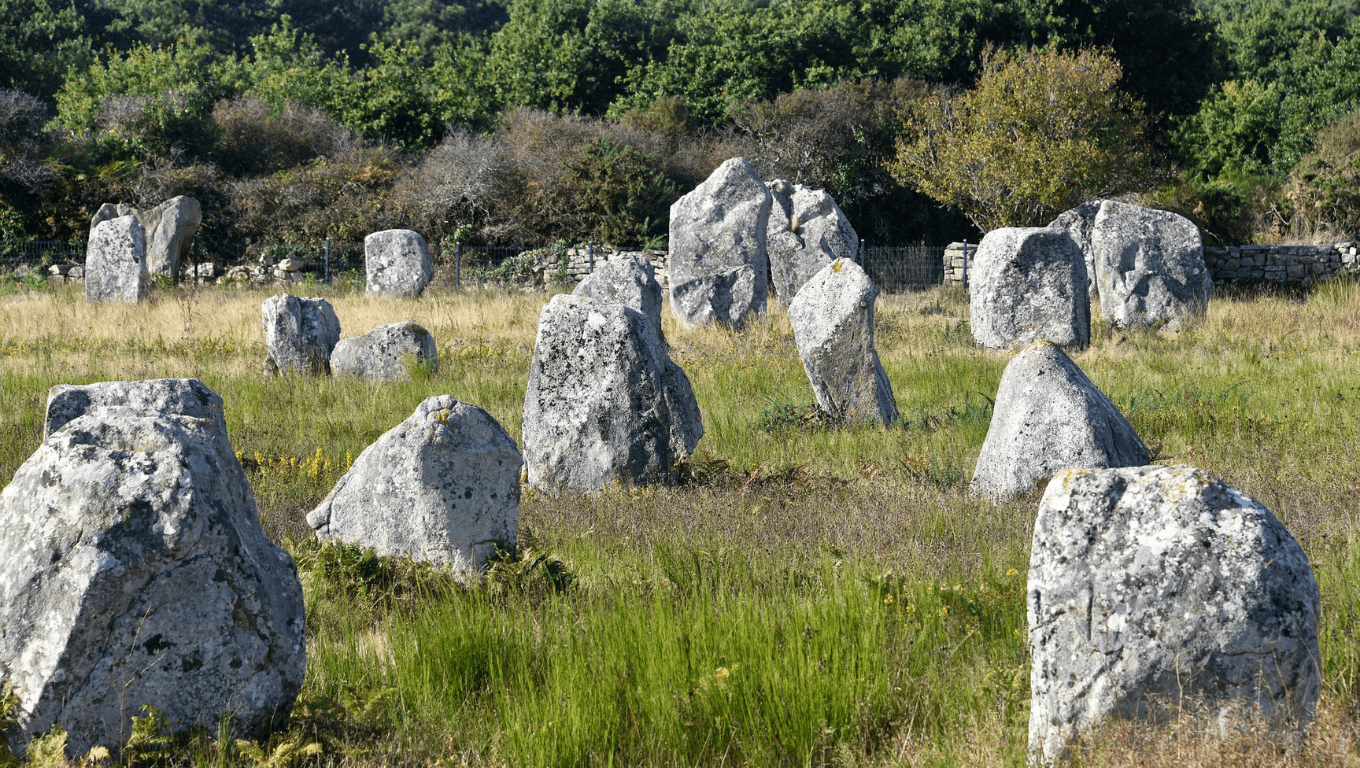 Constructed over 11,000 years ago, this mysterious (and huge!) monument is in southeastern Turkey predates Stonehenge by 6000 years.

The pillars as tall as five metres, some carved with animal shapes or weighing up to 10 tons; stone circles 65 feet across. Using radar and geomagnetic surveys, 16 or more megalithic circles can be detected underground.

So much has yet to be dug up here and archaeologists are predicting at least another 50 years of excavations. What is known is that this site is Neolithic and predates agriculture by 500 years and writing by 6000. We still don’t know much more about this mysterious place. 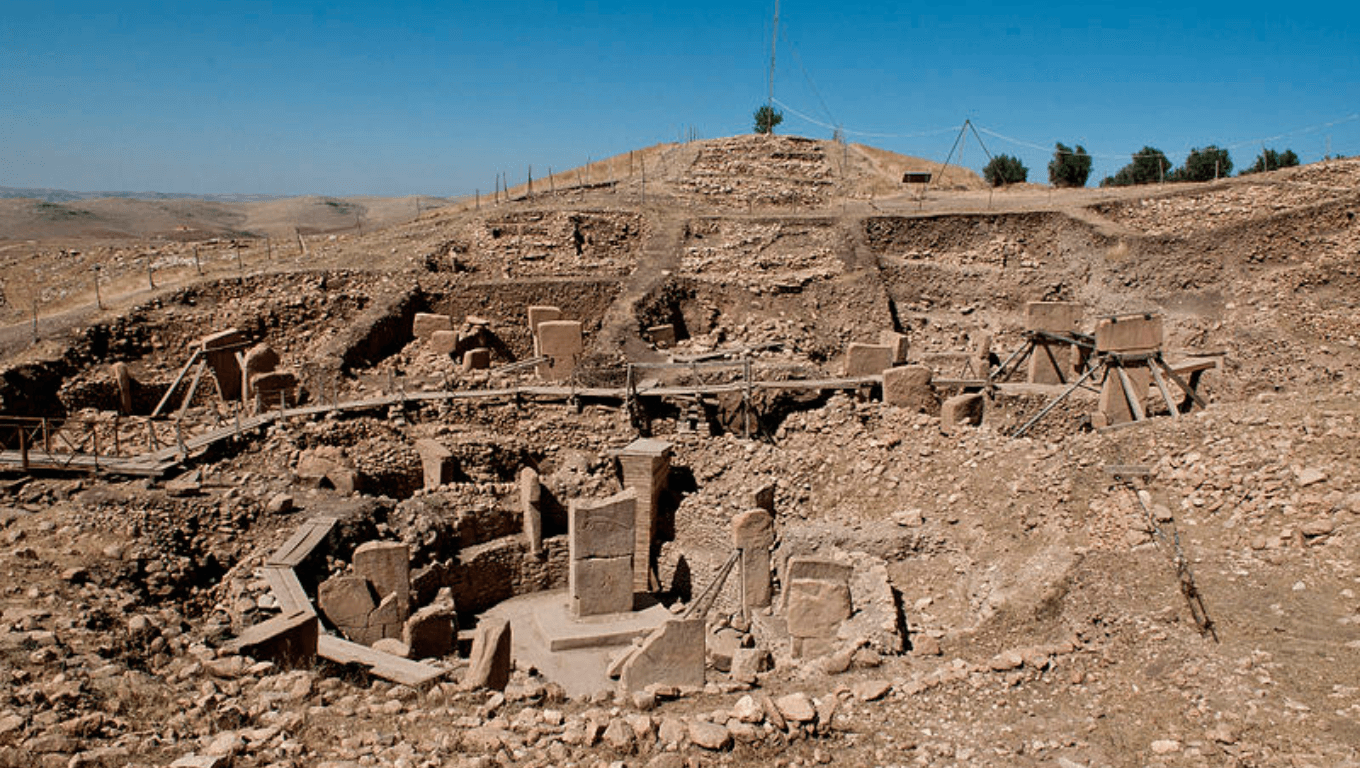 Off the shores of Alexandria, the ancient city of Alexander the Great, lie what are believed to be the ruins of the royal quarters of Cleopatra. It is believed that earthquakes over 1,500 years ago were responsible for casting this into the sea, along with artifacts, statues and other parts of Cleopatra’s palace. Can you think of a more fascinating view than these submerged wonders?

The fascination for these underwater ruins is so much that the city of Alexandria even plans to offer underwater tours of this wonder, creating a subsurface museum for visitors and leaving everything in place. We believe it could truly be the experience of a lifetime.

Which mysterious monument fascinates you the most? Let us know in the comments! 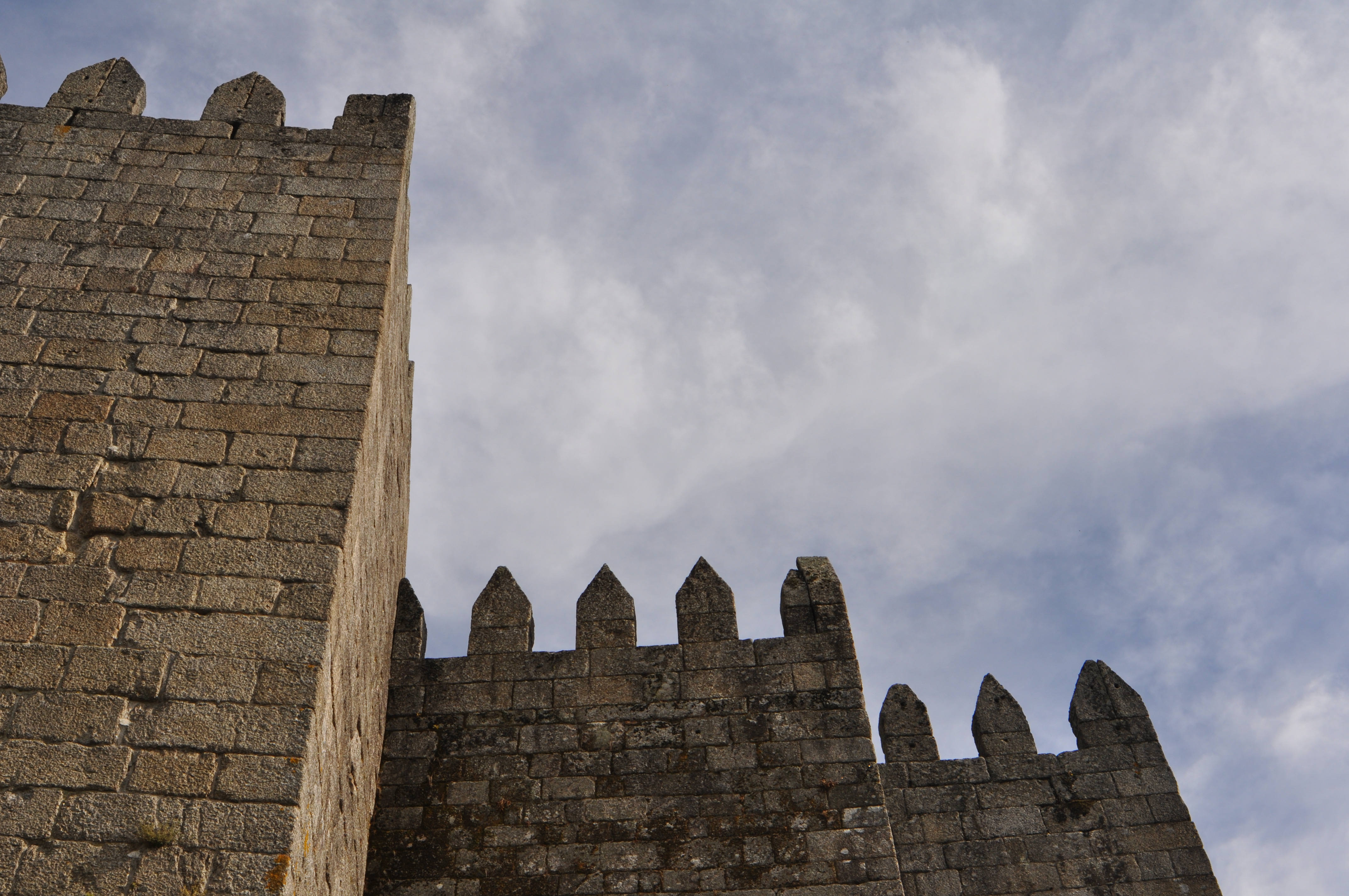 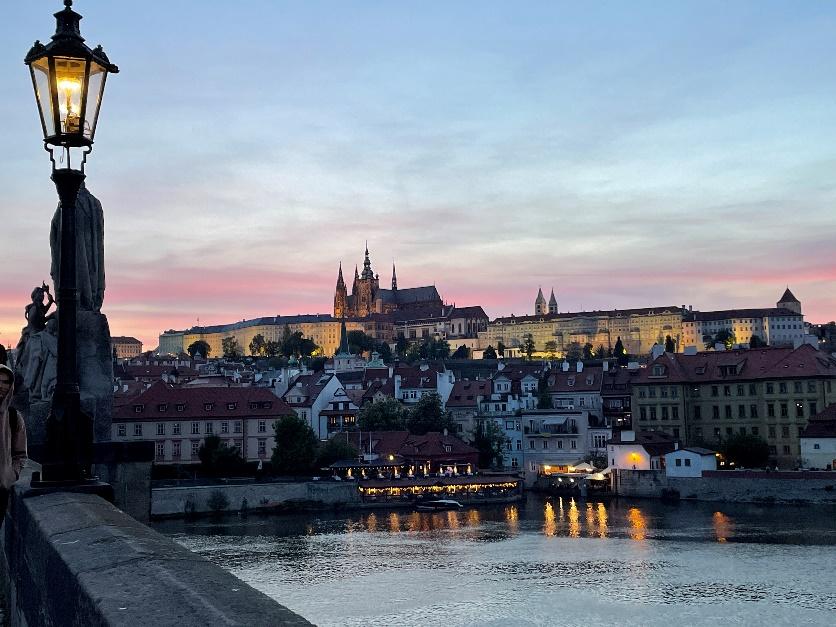