Masonry, which has been used for over 10,000 years, constitutes one of the oldest and most widely spread building material. Currently, masonry is still being used in many countries mainly for housing structures. In addition, a significant number of historical and monumental constructions were built with masonry made of stone, fired brick or adobe units.

Many masonry constructions were built without considering specific seismic design standards and they are characterized by a weak response especially when subjected to seismic actions orthogonal to the plane walls. Such response is mainly caused due to the inappropriate connection between orthogonal walls and the lack of a rigid diaphragm. In this regard, the assessment of the seismic response of masonry structures, especially the unreinforced ones, is an important topic mainly in area with a significant high seismic hazard.

Several investigations have been carried out during the last decades regarding the seismic assessment of this type of structures involving experimental campaigns, numerical simulations as well as analytical formulations. The in-plane response of masonry structures has been thoroughly investigated considering that these buildings are characterized by a box-type behaviour. Nevertheless, unreinforced masonry structure are strongly governed by out-of-plane collapse mechanisms due to the absence of a rigid diaphragm as it has been evidenced by post-earthquake surveys (see Figure 1). For this reason, different investigations have been focused on the out-of-plane response of unreinforced masonry structures. These investigations have demonstrated the complexity of this behaviour especially when considering a dynamic context.

Regarding numerical simulations, a rigorous assessment of the seismic response of unreinforced masonry structures requires sophisticated computational tools based on Finite Element (FE) approach. The investigations associated with the seismic response of this type of buildings are mostly limited to the static field, whereas the dynamic response is usually oriented to research purposes due to the large computational demand it requires to perform this type of analyses.

Recently, a novel modelling approach has been proposed for the assessment of the seismic response of unreinforced and, especially, historical structures. This modelling approach is capable of assessing the response of masonry structures considering the combined interaction between in-plane and out-of-plane collapse mechanisms with a reduced computational demand. 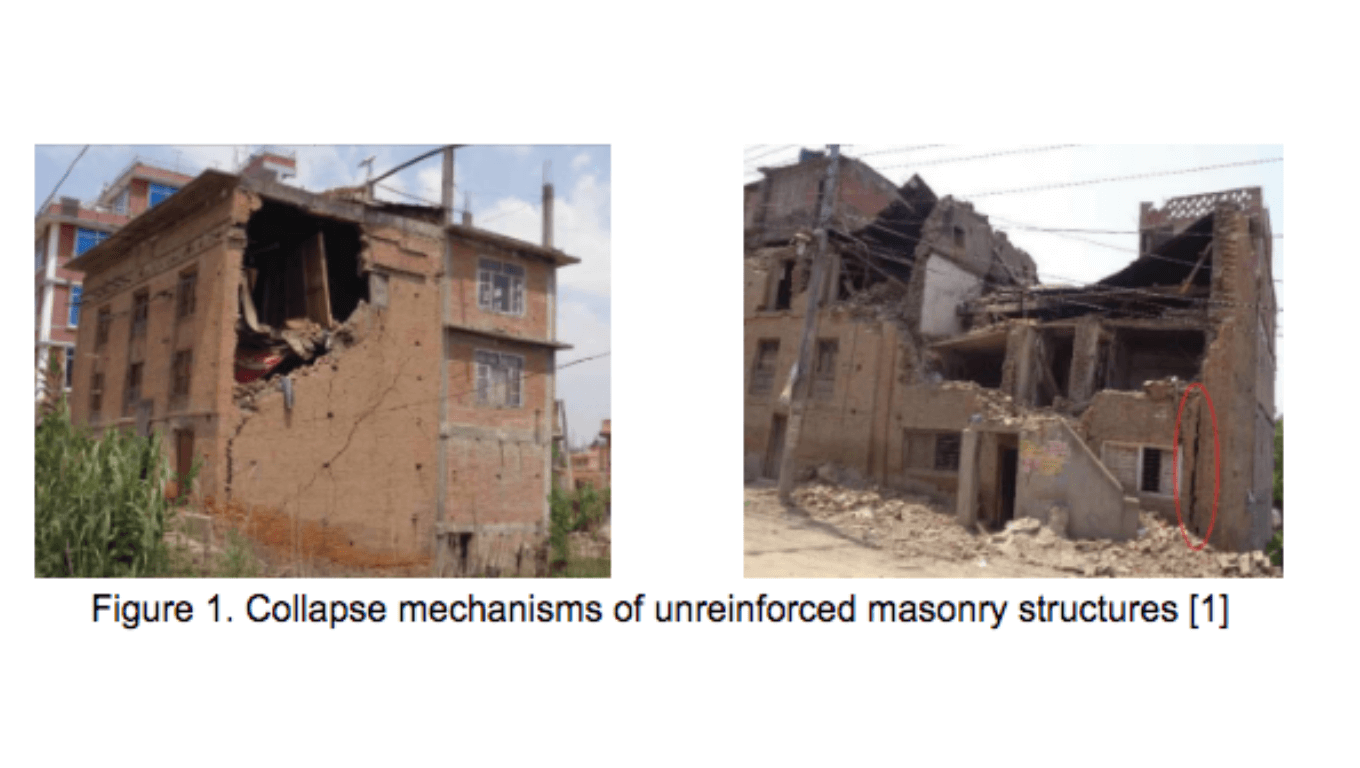 This model was initially focused on the assessment of the in-plane mechanisms of masonry structures [2]. The mechanical scheme of a single two-dimensional panel is composed of four rigid edges connected by four hinges and two diagonal nonlinear links. Two adjacent panels interact by means of a zero-thickness interface element composed of a single nonlinear link placed along its length and a discrete distribution of nonlinear links in the perpendicular direction (see Figure 2a).

This initial mechanical scheme is characterized by four degrees of freedom: three associated with the rigid body motion, and one related to the shear deformability of the panel. The main in-plane mechanisms of masonry structures are governed by each set of nonlinear links. The discrete distribution of transversal links aims at simulating the flexural response, whereas the single link along the length of the interface element and the remaining link at each panel rule the in-plane shear deformability, namely sliding and diagonal, respectively.

This initial mechanical scheme was further upgraded in order to simulate the combined interaction between in-plane and out-of-plane mechanisms that characterize the response of URM buildings [3]. As shown in Figure 2b, the upgraded mechanical scheme is now composed of four rigid plates connected by a single diagonal link. This upgrade also involved the introduction of a new two-dimensional interface element which is now composed of three sets of nonlinear links.

The upgraded version of the proposed modelling approach is characterized by seven degrees of freedom: six related to the rigid body motion and one associated with the in-plane shear deformability. Each set of link require a proper calibration procedure in order to ensure the correct simulation of the mechanisms of this type of structures. 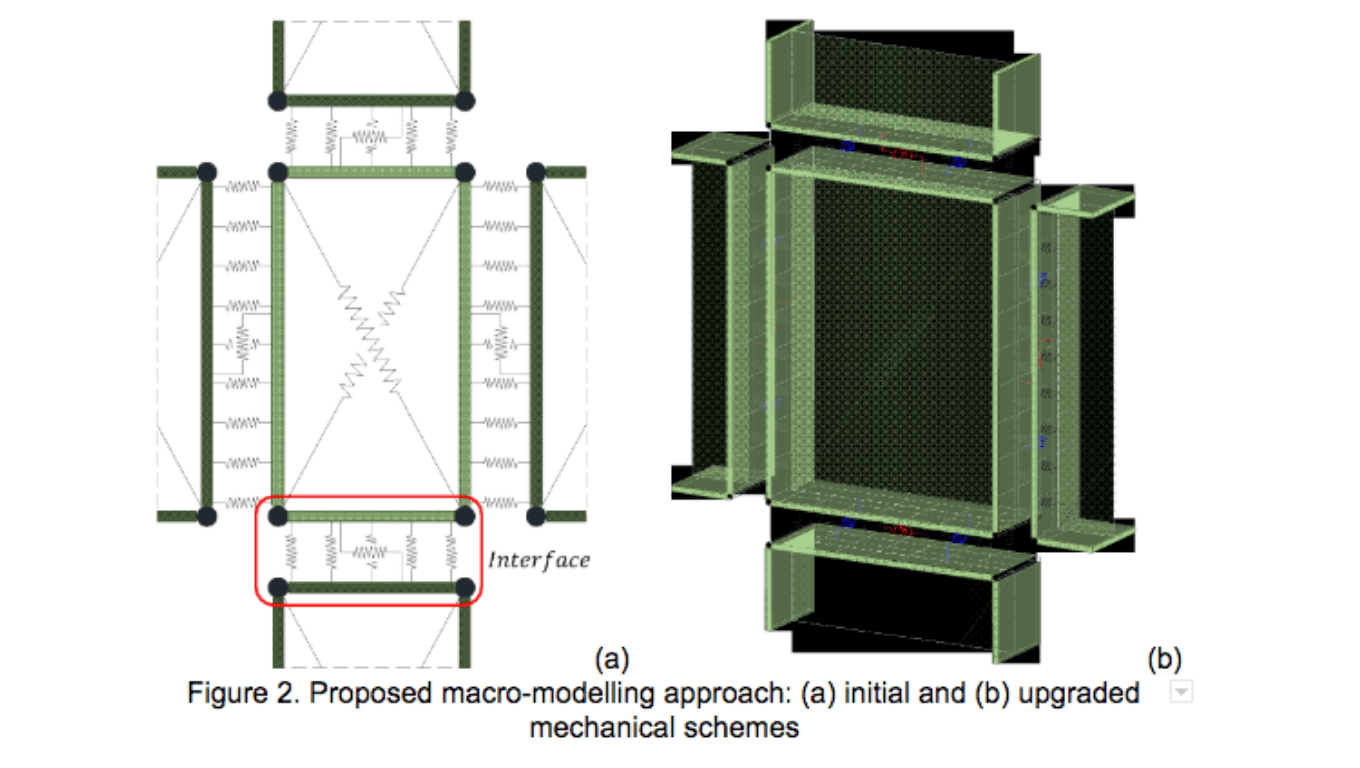 The proposed modelling approach has been used for assessing the response of historical masonry structures. For instance, the seismic behaviour of the Sant’Ippolisto church, located in Avellino, Italy, was initially investigated considering a set of substructures subjected to in-plane lateral forces. Further investigations associated with this church involved a complete three-dimensional macro-model (see Figure 3a) subjected to incremental mass distributed lateral forces in both horizontal directions.

In the latter, the interaction between in-plane and out-of-plane collapse mechanisms was taken into consideration when assessing the seismic behaviour of the church [8]. The results obtained with the proposed modelling approach were compared to the ones reported in literature, and it was possible to demonstrate its capabilities for assessing historic masonry structures.

A more recent investigation involved a typological Portuguese masonry structures. These typological structures, known as Gaioleiro buildings, are characterized by timber roofs providing the behaviour of flexible diaphragms. The assessment of this structure was conducted also in the static field. Pushover analyses were performed to a macro-model (see Figure 3b) and the results, in terms of capacity curve and collapse mechanisms, were compared to the ones obtained with a refined Finite Element model [9].

The proposed macro-modelling approach is also capable of assessing the seismic response of URM buildings in the nonlinear dynamic field. The seismic behaviour of a brick masonry specimen was investigated by means of experimental campaign [10] together with different computational approaches [11-15].

In a recent investigation, a macro-model of such brick masonry structure (see Figure 3c), resembling the main façade of churches, was subjected to time history analyses using the ground motion input recorded from the experimental tests [16]. A comparison between experimental and numerical results was conducted in order to validate the effectiveness of the proposed macro-modeling approach. A reasonable agreement among the different approaches was obtained in terms of collapse mechanisms and hysteretic response. It is worth noting that there was a significantly large decrease on the computational demand since the numerical models based on the proposed approach are characterized by a reduced number of degrees of freedom.

All in all, this modeling approach comes as an innovative alternative tool for the assessment of historical masonry structures for practical and engineering purposes due to the different features it acquires.