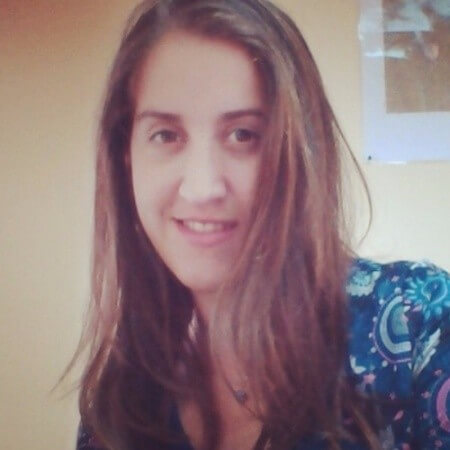 author: mariana
Based on the thesis by: Sonia Guerra Pinto, Freelance Architect with 5 years of experience in Public Service (MINVU Consultant Registry and Independent Reviewer of the 3rd Current Category)

Historical timber-framed structures can be found all over the world since ancient times, being able to observe a variety of procedures and construction systems which is adapted to each zone according to the materials and available knowledge. Recent earthquakes have highlighted the good anti-seismic behavior of this structural typology. Likewise, its antiquity has also evidenced a good structural capacity. 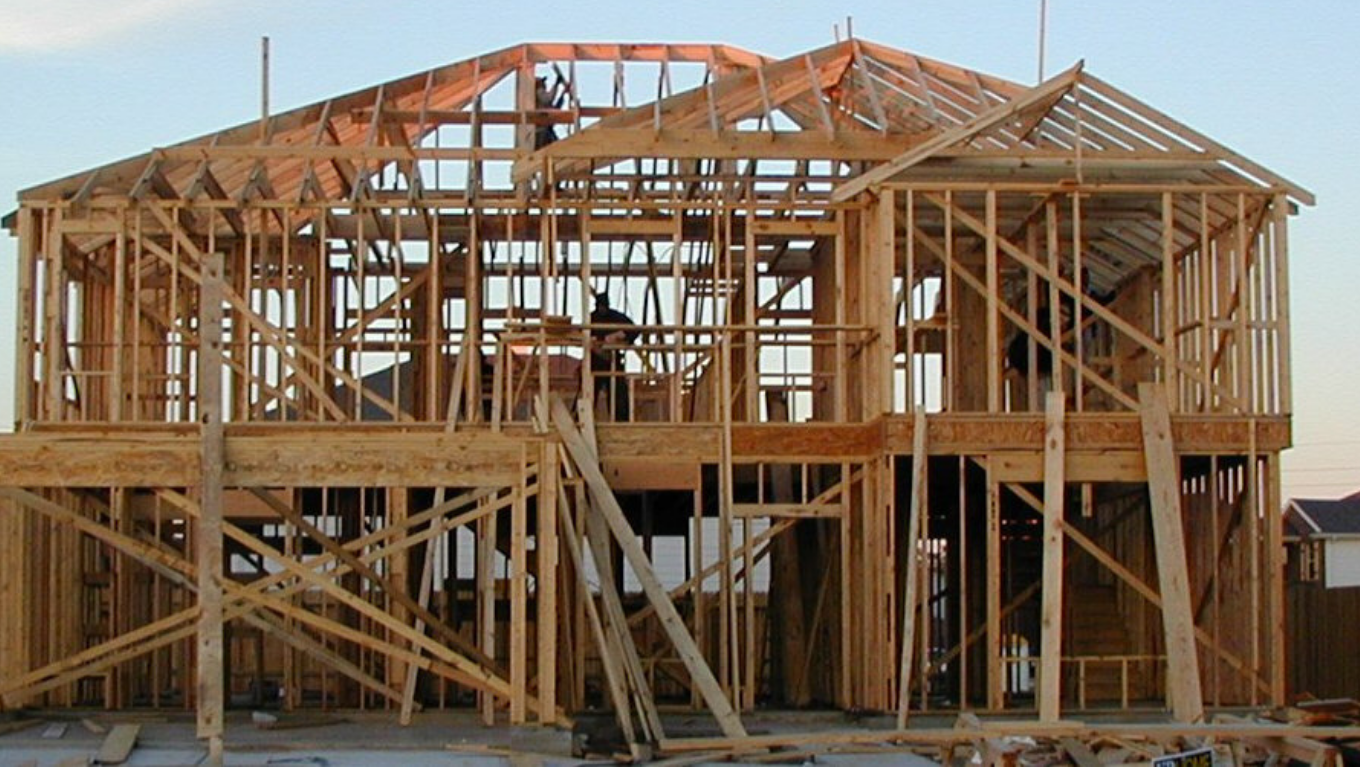 The case of Pombalino Buildings are born from the need to build an anti-seismic constructive system after the earthquake of Lisbon 1755 which destroyed most part of the city. The present thesis of the autor Sonia Guerra Pinto seeks to complement the study of these buildings due to the uncertainty related to their seismic behavior since up to date there has not yet been an earthquake registered in Lisbon since 1755.

In Central and South America timber has been used since prehistoric times, there is data from the year 16.500 B.C. in Monte Verde, Chile. European archaeological excavations in the buried settlements after the eruption of Vesuvius in 79 A.C. brought into light timber frame walls in many noble buildings mainly of Herculaneum and secondarily of Pompeii.

Although there is a large amount of information regarding timber structures throughout history, the present literature review will focus on historic timber framed structures which are dated since the 17th Century in Europe (Spain) and since the 16th Century in South America, specifically in Peru.

This type of framing is assigned different names which is associated to a specific constructive system that varies according to the region in which it has been built, for example in territories from Southern Central Anatolia to the Ottoman Balkans including Black Sea Coasts of Romania, Crimea, Bulgaria, FYR Macedonia and Bosnia Herzegovina to Greece in the West we can find “hımıs” ;  In Spain the timber-framed construction system was called “entramado o telar”, 'Borbone' Constructive system is found in the Calabrian Region of Italy, “Dahjji Construction” in Pakistan, “Pombalino” Constructions in Lisbon – Portugal and in South America we can find “Quincha” Buildings in the coastal area of Perú, “Adobillo” Structures in the Central Zone of Chile  and “Gingerbread Houses” and “Kay Peyi” in Haiti .

Studies show that timber structures behave very well under seismic loads, the 2010 the Haiti earthquake has revealed that traditional construction techniques have value in resisting to earthquakes.

Ambraseys & Jackson state that after the 1509 Istanbul Earthquake, the Ottoman authorities prohibited masonry and enforced the construction of timber-frame houses, claiming that masonry was responsible for most of the casualties produced by the earthquake. By the end of the century the city was almost entirely built in wood. For a set of earthquakes between the beginning of the 20th century and 1980 in Turkey and Greece, it is stated that that 'the number of people killed per 100 houses destroyed by earthquakes of magnitude equal to or greater than 5,0 is only around 1 for timber constructions.

In Peru the Quincha technique reached its peak after the 1687 earthquake, when a law was passed ruling that quincha must be used for the upper storeys of any building greater than a single storey in height.

Today a number of these buildings survive, most dating from the 18th and 19th centuries, with quincha in the upper storeys, and the first storey in adobe or fired brick . In the Calabrian region of Italy after the 1783 earthquake the government ruled by Borbone dynasty enacted what is considered the first European anti-seismic code; called 'Sistema costruttivo borbonico' that amongst other measures enforced the presence in the new constructions or repair of damaged buildings, of a timber skeleton as an essential requirement to ensure safety.

In Portugal the Pombalino buildings were introduced after the 1755 catastrophic earthquake as a structural solution that would provide the required seismic resistance. These were built in quarters, each block comprising an average of 10 buildings, it was arguably the first case in history of an entire town built with the purpose of providing seismic resistance to its buildings. 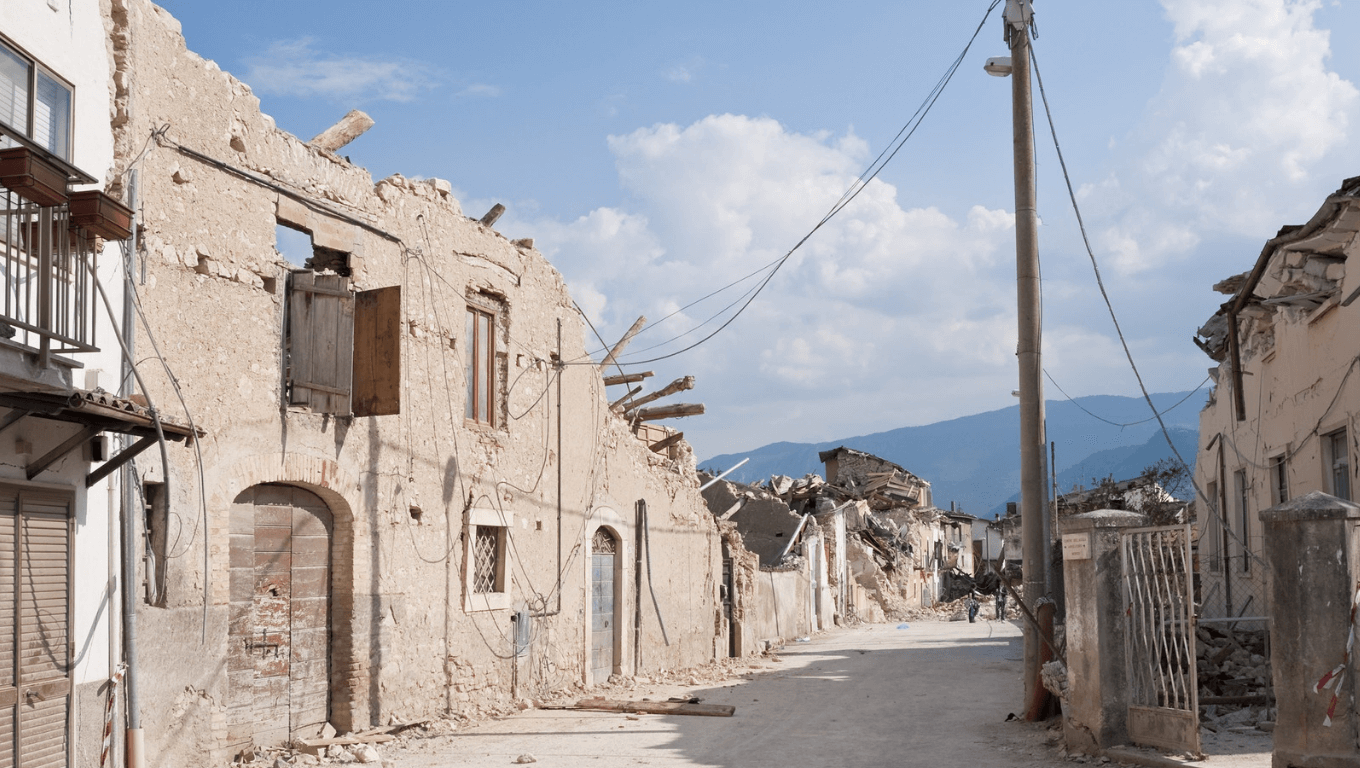 In this thesis, the assumptions and considerations for the elaboration of the macro-model is explained and discussed.

In order to study the non-linearities of the present model, some considerations had to be done, this has lead to a calibration process where graphs were elaborated to show the results.

Open System for Earthquake Engineering Simulation (OpenSees), was initially developed by F. McKenna and G. L. Fenves with many other contributors at the NSF sponsored Pacific Earthquake Engineering (PEER) centre, is an object-oriented framework for simulating applications in earthquake engineering using finite element analysis . It has the capability to perform many types of analysis including static push-over, static reversed-cyclic, dynamic time-series, and uniform or multi-supported excitations for inelastic time-history analysis for both structural and geotechnical systems.

The OpenSees platform originally does not contain a graphical user interface and can therefore be challenging for users unfamiliar with the Tcl/Tk scripting language. Although there are several plugins such as 'OpenSeesNavigator' for Matlab and 'OSLite V0.35' that allow us to visualize the current model, also allowing us to visualize it's stresses and modal shapes. GID program can be used in order to generate the coordinates, nodes and elements of the model that shall be developed.

First it is important to establish the number of degrees of freedom and the dimension of the problem (1, 2 or 3) and afterwards consider the next steps:

The model builder constructs as in any finite element analysis, the analyst's first step is to establish the nodes and it's coordinates, afterwards the column, beam, diagonal and girders are established as displacement beam column, truss element, linear beam column, plastic hinge, among others. In the case of the elaborated model Non-Linear Beam Column Elements were considered which is an object command based on the non-iterative or iterative force formulation and considers the spread of plasticity along the element.

This command is used to construct a plane 2D mesh object which can be represented as a Quadrilateral Element, Shell Element, Bbar Plane Strain Quadrilateral Element or Enhanced Strain Quadrilateral Element. In the case of the model elaboration Shell Element (ShellMITC4) is used, which uses a bilinear isoparametric formulation in combination with a modified shear interpolation to improve thin-plate bending performance, which will be considered in order to represent masonry surfaces. In this process the properties of the section are established as a PlateFiber and Elastic Isotropic, defining the young modulus, poisson's ratio and thickness.

The central elements of the diagonals will be considered as uniaxial materials, where the non-linear behavior will be concentrated as SAWS materials properties.

The linear co-ordinate transformation object command performs a linear geometric transformation of beam stiffness and resisting force from the basic local system to the global co-ordinate system. In other words, this command will be established as linear and according to the movement of the model, it must be fixed at one axis and free in two axis (depending on the direction of the forces). For example in Figure 29 it is shown that according to the force application, the present model will be fixed in the z direction.

The Domain object is responsible for storing the objects created by the ModelBuilder as shown in Figure 31 and for providing the Analysis and Recorder objects access to these objects.

The recorder object monitors user-defined parameters in the model during the analysis. This, for example, could be the displacement history at a node in a transient analysis, or the entire state of the model at each step of the solution procedure. Several Recorder objects are created by the analyst to monitor the analysis.

Each analysis in OpenSees consists of the following commands:

Pombalino construction was standardized to be used for the reconstruction of Lisbon after the 1755 earthquake, but its use was not limited to Lisbon. Mass production of building components, a basic principle of Pombaline architecture in Portugal was also used in Vila Real de Santo Antonio, and in many other Portuguese cities.

The form construction of these buildings was very similar to that of Lisbon, the party and exterior walls being in stone, while inside there were timber framed partition walls with St. Andrew crosses incorporated to them. Arches in bricks were used to tie the foundations together and for some walls.

The plan of Santo Antonio, as in Lisbon, consisted of a rectangle, with one of the long sides facing the river, to the east. The rectangle was cut by 5 streets in a North-South direction and orthogonally in an East-West direction. All the streets were the same width and they contained 43 blocks; 32 of which were identical in size, being 240 palms by 100.

In Vila Real, there are four quite distinct architectural types: the river front buildings, the buildings in the square, the single storey houses with towers and the single storey houses without towers. The walls of the residential floor had an anti-seismic wooden structure incorporated into them, similar to that seen in the Pombalino quarter in Lisbon. The roof structure was very simple and repetitive, covered by wooden boards on which the tiles were laid.

The properties of the macromodel were used as a basis to elaborate a numerical model of a global pombalino building. 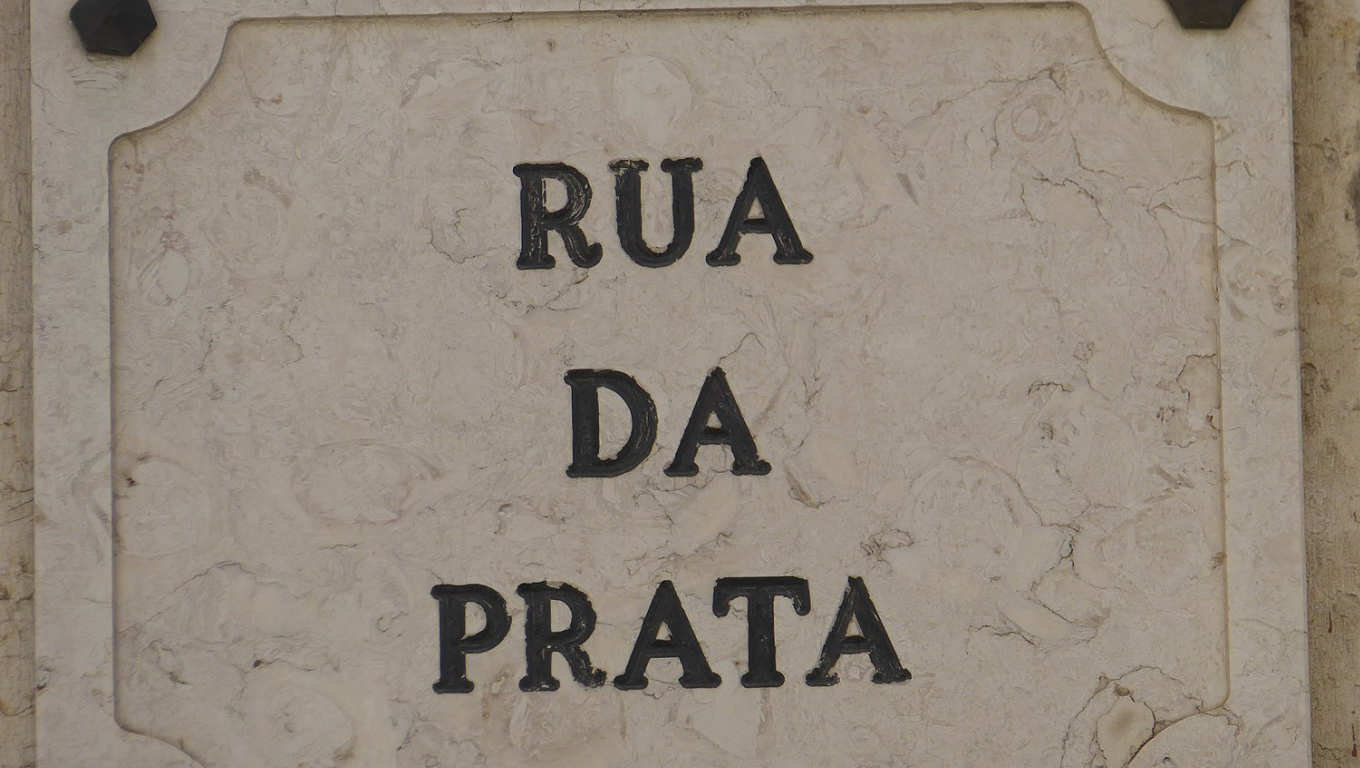 The plan that created the downtown Pombalino was defined by a regular scheme of streets and squares. Each square was divided into lots of buildings with different front widths, but maintaining the same depth and height as shown in Figure 57, which also shows the studies building.

The total area of the square was of 2.000 m2, varying the areas of the lots between one hundred and three hundred square meters. The studied lots have a very wide facade (Figure 57).

In terms of the initial plan, the width of seventeen meters corresponds to six modules of facade, each having 2.8 meters. In the Floor Plan (Figure 58) there are two shops and the entrance of the building. The upper floors (2nd to 4th) are composed of a floor-plan type shown as shown in Figure 59, in which we can find: on the first floor, a row of rods and a commercial store; In the second, an office; In the third, housing; In the fourth, a house with a balcony; The fifth floor is composed of two attics (Figure 60).

In the studied case the rigidity of the masonry walls consequently increases the major stress concentration on timberframe (non-braced) elements. Although it is shown that gaiola (mixed timber- masonry) structure has an important contribution in absorbing the stresses.

Overall, the studied pombalino building has a good seismic behavior in which the high stresses are concentrated on the top section of the building. This is a good indication because the structure will not fail from the middle floors, although it is important to consider the large stress concentrations on the 3rd floor.

Seismic assessment can be performed from the obtained results in order to reduce the stress in this section (it could be recommended to include some longitudinal gaiola bracing element).

Receive every month our top articles about rehabilitation and preservation of historical constructions, information about job opportunities and much more.
EarthquakesHistorical ConstructionLisbonNumerical modellingPortugalrehabilitationseismic behaviourTimberTimber Structures 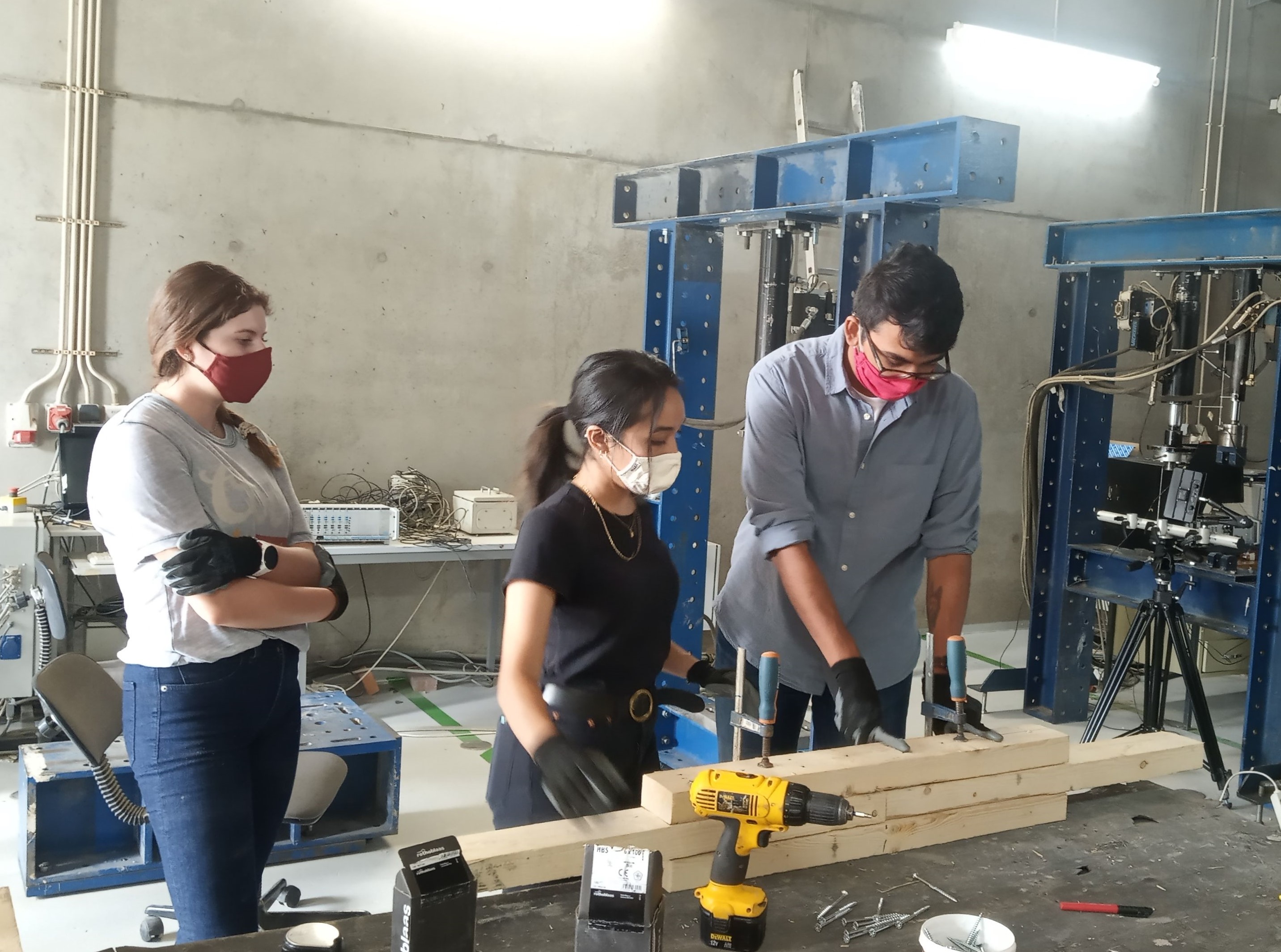 A Year in the Life of a SAHC Student